By Carol Tice September 27, 2011
Opinions expressed by Entrepreneur contributors are their own. 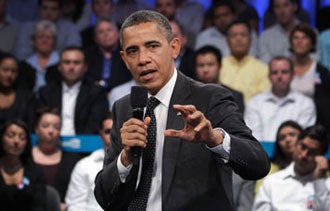 There were no big surprises in the much-touted Town Hall meeting held yesterday by President Barack Obama at the Mountain View, Calif., headquarters of LinkedIn. People mostly asked about how he would put them back to work, while the President mostly touted the American Jobs Act proposal he's trying to get through an oppositional Republican Congress.

There was one clear winner, though -- LinkedIn, which was able to turn the event into a 1-hour ad for the social media platform and its effectiveness as a place to hold meaningful national debate. By moderating the debate himself, LinkedIn CEO Jeff Weiner threw the spotlight on himself and his company in a debate that came off without a hitch.

Nearly 70,000 people tuned in to the Town Hall live and no doubt thousands more will watch the replays both on LinkedIn and at Whitehouse.gov. Viewers didn't learn much new about Obama's positions on the issues, unless they weren't already aware the president wants to improve education, rebuild our infrastructure and invest in science and technology. But the event does mean tons of exposure for that familiar blue-and-white logo, clearly visible on a back wall throughout the event.

Last week, the upcoming Town Hall drove huge engagement on the platform, drawing more than 3,000 questions. As I noted in last week's post about the Obama meetup, many of the questions submitted on LinkedIn were rude -- along the lines of "When will you resign?"

The live questions were less confrontational -- commenters were already remarking about the soft-ball nature of the event in LinkedIn comments moments after the debate concluded. That's likely a measure of the boldness the Internet's anonymity grants people. Sure, you'll make cracks on a chat forum, but would you say that to the President's face? Maybe not.

Though the audience was hand-selected by the White House, it didn't seem to be an Obama love-in by any means. The President was only applauded twice -- at the end, and once when he thanked a retired military member for his service.

Moreover, one Town Hall participant, startup co-founder Adam Berkowitz of the New York-based discount consumer-products retail website Stockn'Go, says he was disappointed by what the President didn't say. Specifically, he was surprised that most questioners asked what Obama would do to help the unemployed, rather than discuss ways to help small businesses create those needed jobs.

Berkowitz wanted to hear more about what could be done to cut small-business healthcare costs. "Rising medical costs have undone the effect of all their other programs," he says. "I haven't seen a lot of help from him, to be honest."

At this point, the administration's biggest task may be instilling confidence in American consumers and getting them spending again, Berkowitz says.

"A lot of small business owners are scared," he says. "They don't want to invest if they don't think people will buy."

What did you think of the town hall meeting? Leave a comment and let us know.