It's not the hardest sell in the world: A product called Adult Chocolate Milk naturally sounds like a good idea. Add that it tastes delicious and is peddled by rapper Ginuwine and girls in sexy milkman outfits and it's no surprise that Adult Beverage Company's flagship product quickly took off.

The inspiration to "Re-taste your youth … at 40 proof" came from a simple Facebook status update posted by co-founder Tracy Reinhardt: "Tracy is enjoying some adult chocolate milk." The single mom had recently gone through a divorce and was relaxing one night with a homemade concoction after she'd put the kids to bed. She often mixed up different brews, but this particular creation--chocolate milk, vodka and a few secret ingredients--sparked much discussion from her friends online, including comments from high school friend Nikki Halbur.

"It totally became Facebook fodder: ‘Had a rough day, wish I had some ACM,'" says Halbur, also a mother of two. "Things are so hectic, you're up to your armpits in babies, and you just want to escape to a simpler time. And that was the appeal."

At the time, Halbur was looking to invest in a business she believed in, and decided to take a trip from her home in Arizona to Newport Beach, Calif., to visit Reinhardt for a girl's night.

"It was literally our 'aha' moment, on the sofa, having some adult chocolate milk: ‘Why don't we do this together?'" Reinhardt says.

The two thirtysomething moms--Reinhardt, a bubbly blonde with a background in sales and marketing, and Halbur, an equally bubbly brunette who formerly worked in supply chain management and manufacturing--dove headfirst into the venture.

Shaking Things Up
From the start, Reinhardt and Halbur's drink was a hit--before it was ever officially bottled. Through some of Reinhardt's connections, she and Halbur were invited to bring Adult Chocolate Milk to a breast cancer benefit party at a pre-Emmy luncheon at the home of Adrienne Maloof (of Bravo's Real Housewives of Beverly Hills fame). The two got to work fast, incorporating in 48 hours, putting together a logo and printing business cards. They bought the ingredients they would need, mixed the drink in Maloof's kitchen, served it with little red straws and passed it out at their ACM booth.

"When you looked out that day, there was just a sea of red straws--everyone's talking about it, people are stopping by our booth saying, ‘You're the chocolate milk people!' It spread like wildfire," Halbur says. "We knew then that we were on to something." 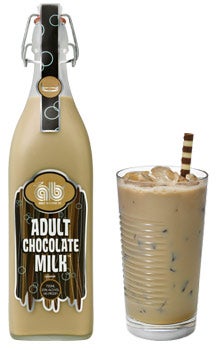 From there, PR reps started reaching out to them about the product, and Reinhardt and Halbur were invited to a Golden Globes party, a Super Bowl party hosted by the NFL Players Association and the star-studded "SOS: Help for Haiti" benefit concert.

"We wanted to go the celebrity route," Reinhardt says. "It's non-conventional as far as what everybody else has done to start a business. We never had a business plan. Our first focus group was a bunch of celebrities."

As the pair saw the popularity of their concept grow, they made some practical headway as well: They outsourced production and got Alcohol and Tobacco Tax and Trade Bureau approval. It was the actual formulation of the drink that proved to be one of their biggest challenges.

Since what Reinhardt had originally created was made from products already on the market, the ACM recipe had to essentially be re-created. "We had to reverse engineer it. We had to make a shelf-stable version not made with milk, not refrigerated," Halbur says, which was also important because both moms wanted a drink that could be kept separate from real chocolate milk and the little hands that reach for it.

What they came up with was a 40-proof blend of vodka and chocolate and cream flavors that stays good on the shelf for up to a year. But it took 16 rounds of testing to get the flavor just right.

After sending their formula to a few manufacturers, they had yet to find one that could replicate the homemade recipe. Reinhardt finally discovered the problem--the "secret ingredient" was missing. Once the formula was complete, Adult Chocolate Milk was ready for bottling.

Show Me the Milk Money
To finance the endeavor, Reinhardt and Halbur put in about $100,000 of their own savings in the first year. ACM started shipping in October 2010, and distribution expanded from four states to 40 in less than six months. By the end of this year the duo plans to distribute their beverage in all 50 states.

Reinhardt and Halbur say their target customers are men and women in their 30s, but note that the retro feel of ACM's label and packaging--an old-school milk bottle--also attracts an older crowd. "A lot of people gravitate toward it--something about this brand resonates with everyone," Halbur says.

Adult Chocolate Milk is sold in select Kroger, Sam's Club, Ralphs, Albertsons, BevMo and Costco stores, as well as some liquor stores and bars. The 750-ml bottle retails for $19; a 1-liter bottle is $23.

The partnership with wine and spirits supplier W.J.Deutsch & Sons has also factored into their growth.

"Deutsch has strength and power in their wholesaler relationships, and that's often the hardest thing for a small brand like ours--to get mindshare with the wholesalers," Halbur says. "They have big brands with big quotas and big contracts, and while they may like us, we're not a priority to them. So we become one of the big guys by being with Deutsch."

Reinhardt says she and Halbur resisted the partnership at first, but ultimately decided the 30-year-old company's core values and view of the future of the brand fit with their vision. They joined forces in mid-July, expanding the ACM staff from about five to nearly 100, and the resulting Adult Beverage Company will soon be introducing products in line with the brand, including Adult Fruit Punch, Adult Limeade and Adult Strawberry Milk.

Endlessly enthusiastic, Reinhardt and Halbur refuse to slow down. Besides growing their distribution and releasing new flavors, they're also working on starting a foundation to support and empower abuse survivors through coaching and mentoring. "We've never worked so hard in our lives, but we've never had so much fun doing it," Reinhardt says. "If we would have hesitated at any moment this wouldn't have happened. It sounds cliché to say ‘follow your dreams and do it,' but I know for us, we've never once thought this wouldn't be successful."


The Flavor of Fortune
Sure it tastes good--a boozy chocolate drink is kind of a no-brainer. But what sets Tracy Reinhardt and Nikki Halbur's Adult Chocolate Milk apart is the unending faith they had in their now multimillion-dollar venture. Here's their recipe for success: