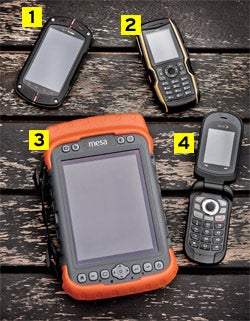 Anyone clinging to the notion that starting a business is a spic-and-span, khakis-wearing endeavour has never done it. Getting an operation off the ground is about as messy as you can get.

So you need a phone that can take it.

Until recently, phones that could be dropped, run over or otherwise abused were either ugly or low functioning or both. But now, phone makers and carriers are offering excellent ruggedized mobile options. Here's a look at the top end of tough phones for your business.

1. Casio G'zOne: Commando ($150 from Verizon with a two-year plan)
For what you would pay for a reasonable smartphone, you get a reasonable smartphone--with full Android power, zillions of apps and a 5-megapixel camera--that you can also drop, bash and lock in your freezer set to minus 25 degrees Celsius for a full 96 hours. If you are testing the rugged phone waters, start with a G'zOne.

2. Sonim XP1300 Core ($425 with no contract)
For a basic, unlocked, rugged phone that will work on any GSM-based provider's network in the U.S, get the Sonim XP1300. You'll find this unit utterly void of bells and whistles. But here, simplicity translates to toughness: The XP is as close to indestructible as a phone can get.

3. Juniper Systems Mesa Rugged Notepad (starts at $2,800)
Designed, engineered and built by Logan, Utah-based Juniper Systems, this notepad is tougher than most military specs. It's immune to a 30-foot drop, full freezing and a direct sledgehammer hit--heck, you can use this thing as a hammer if you want. For a data-enabled, portable mini-tablet that absolutely, positively has to work anywhere, it has to be the Mesa.

4. Sanyo Taho ($50 from Sprint with a two-year plan)
This phone has limited features, no apps and looks that could not be more dorky. So why do we care? Two words: 50 bucks. For the price of a basic cell phone, you get one with legit military-grade durability. For staying connected in rugged terrain on the cheap, the Taho makes a strong business argument.