By Mikal E. Belicove October 19, 2011
Opinions expressed by Entrepreneur contributors are their own. 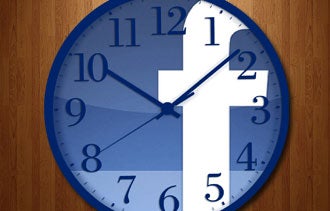 You've just added a status update to your Facebook business page, and, so far, you've received 57 Likes and about dozen comments on both the blog post it focuses on and the Facebook status update itself.

The question is, how long is this online euphoria going to last? Will your update continue to attract comments and Likes well into the foreseeable future? Highly unlikely, says Jeff Widman, co-founder of PageLever, a Mountain View, Calif.-based startup that makes analytics and metrics tools for Facebook pages. In fact, if Widman's prognosticating is correct, you've got a shade less than 23 hours to bask in the active attention that that Facebook post is attracting.

Whether you're promoting a blog post, introducing a new product or service or enticing potential fans with contests, coupons or causes, it's important to know that you only have a limited amount of time to make your mark. As status updates don't remain in the Facebook Newsfeed for long, devising a timing strategy for how often to post new items to your Facebook page should be a priority. Here are Widman's findings, which could help guide you toward crafting an optimal timetable for updating your Facebook status:

Widman co-founded PageLever to help companies including YouTube, MTV, Microsoft and others drive more fans, traffic, comments and Newsfeed impressions to their Facebook pages. Earlier this month, he compiled information on the life of the average Facebook status update from an informal study he conducted using a very small sample. And by small, we're talking only 20 status updates from five pages (certainly not representative of all Facebook posts). However, each of these pages has more than two million fans.

He found that the average lifetime of a post in the Facebook Newsfeed is 22 hours and 51 minutes for comments and Likes, and 28 hours and 57 minutes for per-post impressions. He said that it has been his experience that the post-Ticker version of Facebook's EdgeRank drops posts much faster than the pre-Ticker version, based on how often you log onto Facebook.

Widman's survey also showed that the standard deviation of hours of posting ranged from a minimum of 10 hours and 42 minutes for comments and Likes and 11 hours and 29 minutes for per-post impressions. And the lifetime of posts outside that span of time varies greatly, ranging from a minimum of 10 hours for some comments and Likes, to 59 hours for a long-lasting per-post impression.

Why should you know how long a status update remains in the Facebook Newsfeed? For starters, one status update that's visible to your fans on the Newsfeed is really all you want at one time. Any more than that and you run the risk of annoying your fan base. Any less, and it's like the old expression: Out of sight, out of mind. Not to mention the fact that during the time you're "in between" posts, you're losing opportunities to present important news or offers to those who Like your business or brand.

Have you including a timing element in your Facebook marketing strategy? Let us know how it's going in the comments section below.