Why Some Small Businesses Are Occupying Wall Street

Carol Tice
Owner of Make a Living Writing
October 19, 2011 min read
Opinions expressed by Entrepreneur contributors are their own. 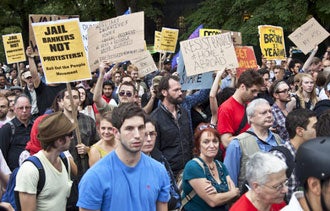 If you've written off Occupy Wall Street protestors as just a bunch of aimless, unemployed young people, you might want to reconsider.

Polls from various news outlets show that most Americans approve of the protests, which, at this point, have drawn in hundreds of thousands of supporters around the world and sparked encampments in cities across the country. And beyond young unemployed people in New York, many small-business owners aren't exactly thrilled with practices like bailouts for big companies and outsized Wall-Street paychecks, to name two major complaints.

Though some business owners have complained that the protestors have put a crimp in sales and damaged property, others are increasingly taking up the protestors' cause. Main Street Alliance, a small business advocacy group, has already weighed in with their support for the Occupation. Here are the comments of a few owners who're supporting Occupy movements in various cities, courtesy of the Alliance:

"Small businesses don't need more tax giveaways for the rich. We don't need more money spent on bank bailouts, subsidies for oil companies, corporate agribusiness and the wars. We need money reinvested in American infrastructure, education and people," says David Meinert, owner of Big Mario's Pizza & 5 Point Café in Seattle. Big Mario's donated over 100 slices of pizza to the protestors camping out in Seattle's Westlake Park, before outside donors picked up the torch. He now delivers two donated pizzas a day to protestors and offers discount prices to donors. He installed a donation button at the top of the pizza shop's website offering discount prices for Occupy supporters.

"The 1 percent's willingness to sacrifice our democracy for their own fortunes and power, to risk working people's retirements with risky investments, to exploit our natural resources for personal gain -- these are not sound business principles," he says. "Any small business that operated that way would be run out of town in a week."

Similarly, in Falmouth, Maine, Melanie Collins has lent her support to local protestors. The owner of Melanie's Home Childcare calls supporting the protestors "basic math." "To create jobs, we need customers, but the richest 1 percent can't spend their exploding fortunes fast enough to keep the economy going for the other 99 percent, which includes virtually every small business."

Her suggestions to fix the economy? "Pass the American Jobs Act. Write down underwater mortgages. Regulate banks and big businesses to protect the 99 percent from our taxes being used for more bailouts, gambling, outrageous bonuses and lobbying against us. Tax big business -- make the wealthy and Wall Street pay their fair share to raise money for local job creation."

Kit Schackner adds that she would also like to see consequences for those responsible for the economic meltdown. "Those at the top of the financial chain who share direct responsibility for this recession have not been held accountable," says the owner of Foley-Waite Associates an architectural woodworking company in Bloomfield, N.J. "They have not suffered the losses they have visited on millions of small businesses across America. While Main Street struggles to cover costs, make payroll, and stay in business, Wall Street continues to bank record profits."

"Until small business owners see some accountability at the top, until we see that our pain is shared by those who created it -- the bankers and the CEOs -- we will stand in solidarity with Occupy Wall Street."

Will your small business support Occupy Wall Street? Leave a comment and tell us your position.