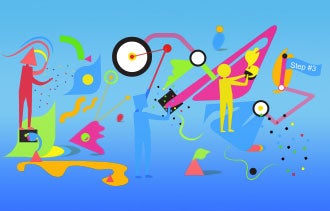 Watch out, Microsoft PowerPoint: Google Docs has unveiled some serious upgrades to its online presentation editor. The changes -- which include better collaboration features and more editing tools -- are the most recent in a series of upgrades to Google's constantly evolving flagship online office software set, Google Apps.

Unlike Microsoft, which rolls out discreet upgrades every few years or so, Google never stops tinkering with Google Apps. The search giant says it has added more than 60 new features since it significantly upgraded the product a year and a half ago.

Considering how vital Google Docs has proven to be for collaborative document-editing -- and that as a free tool it is a favorite among small businesses -- we took Google's new take on presentations for a spin. Here's what we found:

What is it: Google Presentations now includes what is undoubtedly Google Docs' best feature for text documents and spreadsheets: real-time collaboration. Multiple users can now be in the same presentation at once and can watch any changes made more or less as they happen. A built-in chat function supports user communication. A revision history shows what changes have been made and lets users revert to an earlier version.

The basic service remains free, though the actively-supported pay version, Google Apps for Business, runs $50 per user per year.

What you might like: The built-in chat and real-time editing works well and will be a major step forward for groups working together on a presentation. We particularly liked how users can see at a glance which slides their fellow collaborators are working in. A user icon appears in the left side of the screen (in the panel that shows miniature versions of each slide) directly on top of whichever slide each user is working in. We also liked how the new animation and transition tools were integrated. Users should find presentations much easier to create.

What you might not like: Collaborating in a presentation turns out to be a bit more complicated than doing work in a text document. Adding animations, for example, did not render across the system until the action is complete. And it has quirks, like the inability to automatically upgrade existing presentations. Users must manually import or copy and paste old slides into the new editor.

Bottom line: For remote collaboration on basic presentations, Google Docs presentations is a solid step forward, and is worth consideration.