Diana Ransom
November 1, 2011 min read
Opinions expressed by Entrepreneur contributors are their own. 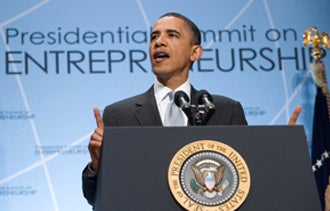 Imagine being able to work on your business at various locations across the U.S., collaborate with technologists and scientists and get startup funding in half the time. Sounds like a kick-ass accelerator program right?

Though the gang from TechStars might offer similar enticements, the U.S. government is behind this souped-up accelerator program. Last week President Barack Obama dispatched two Presidential memorandums -- which are like executive orders in which federal agencies must abide -- aimed at easing entrepreneurs’ access business information and advice, as well as fostering innovation and job creation by improving public/private connections.

These official decrees serve as the latest in a series of executive actions, which are part of the President's "We Can't Wait" initiative. Among other measures, he has called for everything from mortgage-rate relief for underwater homeowners to pairing back federal-loan payments for student borrowers.

Per one of the President's latest orders, agencies that have federal laboratories like the Department of Energy and the National Institutes of Health must push forward by 50 percent the time it takes small businesses to receive research and development grants. The initiative would accelerate technology transfers from federal laboratories and other facilities to private enterprises with the goal of spurring entrepreneurship. The idea is to spark innovation by allowing private enterprises to quickly adapt federal technologies for the marketplace, the President said.

According to President Obama, some agencies have been pilot testing administrative changes to their Small Business Innovation Research (SBIR), and Small Business Technology Transfer (STTR) programs -- which offer federal research grants for small businesses and startups. As a result, those agencies achieved similarly reduced award times -- giving businesses an earlier shot at a slice of the $147 billion pie that the government invests in research and development each year.

In a second Presidential memorandum issued last week, Barack Obama announced the creation of a new, one-stop-shop for entrepreneurs looking for startup information and advice: BusinessUSA. This may sound familiar. Business.gov originally launched in 1997 to help businesses connect with the U.S. government. Yet over time, the site began to reroute its traffic to SBA.gov. For its part, BusinessUSA will have a "no wrong door" policy, or, in other words, if you go to the site, you should be able to find resources and information for everything from federal exporting programs to tips for government contracting. The site is slated to be up in less than 90 days.

For those who are already registered with SBA Direct or Export.gov, however, there's no need to sign up for the new website too, Karen Mills, the head of the Small Business Administration, said on a conference call last Friday. "They can navigate from whatever point of access we have. There are no wrong doors," she added.

Think these measures will help spur entrepreneurship? Leave a comment and let us know.