Groupon, Other Deal Sites Not a Good Deal for Small Businesses 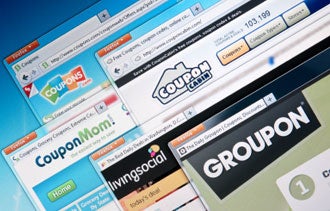 So you spent a considerable amount of money with daily deal websites like Groupon and LivingSocial expecting the offers to drive a ton of new business, only to see your sales needle stay flat. Does this sound like you? If so, chances are you're not alone.

A new report from Cambridge, Mass.-based Forrester Research indicates that the majority of consumers who redeem prepaid vouchers already were customers of the brand or business that was offering the deal. For clothing and shoe stores, this number is as high as 80 percent, according to the report.

Meanwhile, more than half of the customers surveyed for the report, called "Myths And Truths About Daily Deals," say they would have made a purchase regardless of having the coupon voucher.

Another big issue is exactly how many people are paying attention to these deal offers, especially over email. "While Groupon vaunts the size of its 'subscriber base,' all evidence points to the medium becoming less important," says Forrester vice president and senior analyst Sucharita Mulpuru, who co-authored the report. "A significant portion of people who once subscribed to these emails no longer do, and many simply don't want to because they have no need for more clutter in their inboxes."

Last week, Groupon filed for a $700 million initial public offering, valuing shares at $20 each in its first day of trading. As of this morning, the stock was trading at $25.40, down more than two percent since the market's opening. It remains to be seen if other daily deal companies will follow suit and go public.

• Enable companies to decide which consumers get their offers. Mulpuru says that for all the consumer data that daily deal sites claim to collect, not enough is shared with their small-business partners.

• Pivot to new businesses. Mulpuru says we should expect to see more full-price selling, similar to what flash sale sites like Gilt Groupe has already introduced. "New products are one option, but these companies also need to take advantage of the assets they do have," she says. "For small, unknown and untested merchants, Groupon's customer file is a potentially attractive customer acquisition tool that could be a revenue opportunity in itself."

Has your business had any luck with daily deal offers? Let us know by leaving a comment below.