How a 'Smartpen' Can Be a Useful Logistics Tool

The pro and cons of Livescribe, a pen that can digitize hand-written functions such as labeling and entering inventory data.

By Jonathan Blum November 11, 2011
Opinions expressed by Entrepreneur contributors are their own. 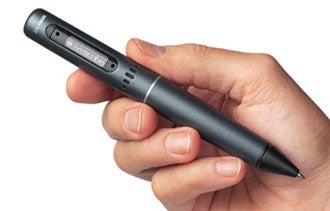 Imagine if there was one device that could replace your old-fashioned pen and paper, and be a substitute for costly mobile work terminals when it comes to shipping and logistics needs. The Livescribe "smartpen" might be the tool that's up for the challenge.

Called a smartpen because it can simultaneously take notes, record conversations and information written on paper and then transfer it to a PC, the Livescribe pen potentially fills a role as an effective logistics tool by digitizing hand-written functions like labeling, entering inventory data and exchanging packages with shippers.

We tested a recent model and found for the specific task of entering and managing shipping information, there is clear upside to the device. Here's what the Livescribe can and can't do to make your shipping smarter:

What is it: The Livescribe Echo is a large pen, about the size of child's giant pencil, that weighs about one and a half ounces. It looks like a standard ball point pen, but built in is a microphone and digital technology that senses a series of dots and control buttons that are printed on Livescribe's specialized "Dot Paper." This special paper can either be printed using a color laser printer, ordered from Livescribe or purchased at retailers including Best Buy or Staples.

Any text written on the Dot Paper, as well as any corresponding audio, can be saved in the Livescribe pen. Compatible with both Windows and Macintosh computers, these files can be uploaded to a user's computer by connecting the pen to it with a micro USB cable. Once transferred, the text or audio can be turned into printed text, emailed, shared through Facebook or Google Docs, or imported into note-taking applications such as Microsoft OneNote.

Livescribe is just one part of larger digital pen market. Among some others are Belgium-based IRISNotes, U.K.-based Digital Field Solutions and Stockholm-based Anoto. All offer some form of digital information capture, but Livescribe offers a number of business-friendly tools, software and support.

What you might like: Using the Livescribe, we were able to write repetitive data such as long shipping numbers, sender and receiver information, purchase-order data and job numbers once on a form, and then automatically transfer that data to a PC with little or no errors. We found it an easy-to-use and cost-effective alternative to often-expensive mobile work terminals, like the ones commonly used by FedEX and UPS employees.

For firms that spend significant time filling out shipping labels and entering the data again in a PC, the time saving can be significant.

What you might not like: As much of a low-cost shipping and data-entry solution as Livescribe turned out to be, it is not a full-on logistics replacement. Creating the forms needed to automatically capture information takes trial and error.

Most Livesribe data flows into standard Microsoft Word documents, so it usually takes another digital step or two to transfer that information into your logistics software. This can usually be accomplished either by using one of the programming options built into Microsoft Office tools like the Access database or Excel, or through a separate app developed from scratch. with terrible handwriting will be challenged by Livescribe.

Related: How to Create an Ecommerce Shipping Strategy to Win Customers

Also keep in mind that Livescribe might be challenged by users who don't have clear handwriting. And, as big and bulky a pen as Livescribe is, it's still a pen. We found it surprisingly easy to misplace.

What to do: If you're hesitant to invest in complex mobile logistics tools, Livescribe is a low-cost, easy-to-deploy mobile data entry tool that most any firm can learn to use. Fast-growing companies will most likely outgrow it but, overall, the Livescribe smartpen can be a useful tool for managing packaging information for your business.