"Average" is the word the National Retail Federation uses to forecast the 2011 holiday season, with an expected 2.8 percent increase to $465.6 billion in sales, just slightly more than the 10-year average of 2.6 percent.

While most of the season's purchases still happen in retail stores, digital research firm comScore reported that online sales between Nov. 1 and Dec. 31, 2010, totaled $32.6 billion--a 12 percent jump over 2009. Electronic marketing research firm eMarketer predicts that 2011 will represent another year of double-digit growth in online holiday spending.

Holiday online retailing has become so much more than just Cyber Monday, that hot shopping start to the post-Thanksgiving week. To capture the most of increased online holiday sales, independent retailers need to be aware of some of the trends and shifts in consumer perspective this year, says retail and consumer expert Andrea Woroch with Windsor, Colo., money-saving website company Kinoli.

3. Add personalized product recommendations to your website, which can contribute 10 percent or more of total sales. Plug-ins like iGoDigital and 4-Tell can help you add these features to your site.

4. Support mobile shopping and browsing by making your website compatible with mobile browsers or by developing customized apps for customers.

5. Review and invest in web analytics to ensure that customers are able to navigate your site quickly and easily, and to see where they are spending time. Use this info to test changes and improvements.

A recent study by management consulting firm Accenture found no significant change in the number of consumers shopping online (66 percent vs. 69 percent in 2010). However, the same study found that 59 percent of shoppers expect to buy more than half of their gifts online. Only 41 percent expected to do so in 2010. But, to get their attention, you'll have to act fast--IBM Coremetrics' 4th Annual Online Retail Holiday Readiness Report found that the average time spent on sites fell to its lowest point in three years: 7:04 minutes in October 2010 vs. 10:04 minutes in April 2008--a 30 percent decline.

"Using the site to assess a shopper's browsing history and previous sales history to offer personalized product recommendations, along with reviews and social media, has turned into additional sales for many retailers," Woroch says.

The IBM report supports her recommendation: Shoppers who arrived on sites via social media were more than twice as likely as the overall population to convert to buyers (10.7 percent vs. 5.2 percent), even though they only spend an average of 3:26 minutes on the site. The IBM Coremetrics study found that recommendations can drive 10 percent of total sales. 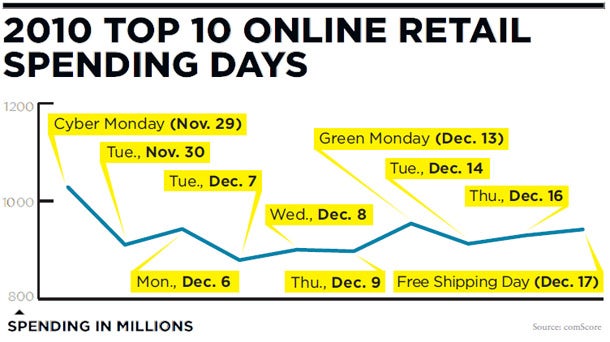 Mobile Matters
The National Retail Federation's Holiday Survival Kit predicts that nearly 50 percent of 18- to 24-year-olds will make a holiday purchase on their smartphones.

Why shop with your mobile device?
43 percent: Get better discounts
32 percent: Receive alerts when product is in stock
Source: Accenture

How to Diagnose Failure to Achieve Success