Building a Business on Solving an Aching Dilemma for Women 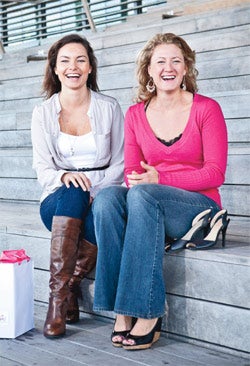 Entrepreneurs: Candice Cabe and Nadine Lubkowitz, founders of Day2Night, a Boston-based startup that makes women's shoes with convertible heels. One pair, such as the peep-toe pump, comes with five heels that can be switched out with the push of a button.

"Aha" moment: Cabe, who got her MBA at Babson College and worked in sales and marketing in the software industry, traveled frequently for her job. She often found herself filling her suitcase with shoes for various events. "I thought it would be really great to have one pair of shoes with multiple heel heights," she says.

How they've developed: Cabe founded Day2Night in May 2010 with an investment of about $15,000, most of which has gone toward prototyping. Her idea was a winner last year at Startup Weekend, a traveling event for aspiring entrepreneurs, and Day2Night was a finalist in entrepreneurship contest MassChallenge. Cabe met Lubkowitz at a Boston startup industry networking event. Lubkowitz, who has a background in product and operational development, joined Day2Night as co-founder earlier this year. 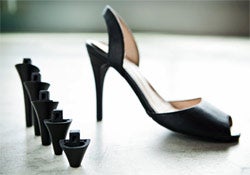 Customers: Through surveying, research and focus groups, Cabe and Lubkowitz have found that Day2Night's target market is 21- to 36-year-old urban women whose commute to work involves walking. "Busy, working, socially active women who don't have a lot of time on their hands, and they're going from one thing to the next," Cabe says.

Cost: The "Marissa" slingback is available for $150.

Marketing: Day2Night has a presence on Facebook and Twitter, and the company website, Convertible-Heels.com, gets more than 600 visitors per day, according to Cabe. But the real catalyst has been crowdfunding platform Kickstarter, on which Day2Night has raised more than $16,000 since May. "It was great to say we have a goal, a specific amount, a time frame and a deadline," she says. Day2Night held a party for Kickstarter fundraising and collected 121 backers and more than 150 names of people interested in purchasing shoes. Cabe says about 75 percent of the Kickstarter donations has come from people in their network; the rest is from people who discovered the company online.

Up next: Cabe would like to license the heel technology to major shoe brands (the company is in early talks with Nine West and Zappos) and is looking into selling her shoes on QVC. Day2Night aims to raise about $200,000 from angels or investors from the shoe industry.