Starting a Business to Fund Your Startup Idea 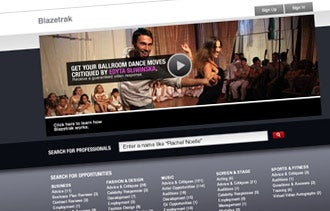 Blazetrak has 50,000 registered users and features commentary from 400 celebrities and experts.

Nate Casey and his business partners had a winning idea: a website that lets users correspond with celebrities and professional leaders they admire. They had a name for their venture--Blazetrak.com--and they had entertainment icons and moguls who were interested in participating. The only thing they lacked was money to build the site.

Failing to secure investors, Casey and partner Corey Stanford instead opened a web consulting firm, Clariwebs, with the idea that they would use the profits from that venture to fund their true passion. After more than a year of bootstrapping, they dissolved Clariwebs and launched Blazetrak (along with a third partner, Ronald Harrison), bringing in revenue from day one. Two years later, the site boasts approximately 50,000 registered users from 202 countries and features commentary from 400 celebrities and experts. We asked Casey about making the transition from Clariwebs to Blazetrak.

How much of Clariwebs' revenue did you put into Blazetrak?
It wasn't a lot of money. Because we created this culture of bootstrapping, it only ended up being $10,000 or $15,000. We were using our own internal team to do a lot of the development work on Blazetrak. There was a lot of sweat that went into it.

How much time did you spend on each business?
We were probably 70 percent on the projects for Clariwebs. In the background, we were constantly building modules for Blazetrak. As we got closer to launching and it got more exciting, the amount of time we were spending on Blazetrak increased. By the final run, we were probably at 70 or 80 percent with Blazetrak.

Did you tell clients about the new business?
We did--particularly the ones we had established strong relationships with and who had become dependent on us for making decisions about their online businesses. It's hard, because you're trying to sustain and take care of customers for one business while in the back of your mind you're thinking about raising money for something else that you feel passionate about.

Any tips on starting a business to finance a product launch?
If you're starting a company or you're doing consulting specifically to raise money for a bigger idea, you have to be 100 percent vested in and committed to why you're doing it. The company that you're creating or the consulting work that you're doing to raise funds could be a big temptation once it starts making a lot of money. You can get really complacent. When we switched over fully to Blazetrak, that's when we started getting all these calls about potential jobs that would have been great if we were still doing Clariwebs. We were making $2,000 our first month on Blazetrak and thinking, "Wow--we could have taken a $30,000 or $40,000 Clariwebs project this month."

What's the biggest downside of funding a startup this way?
It's painful to use your own money, especially when you'd rather spend it on groceries. But that's what makes it a good thing. You get really smart with how you spend it. You say, "We really need to buy this software solution." And then you say, "Is this the right one? Can we find a cheaper version? Can we build it ourselves?"

You start to do a lot of research so you can spend less money or can learn a skill that will save you money over the long term. I figured out how to do our financials for Clariwebs by reading a book on QuickBooks. I use those skills even today.

We got so much out of Clariwebs that helped us with Blazetrak. A lot of the operational stuff, the staff and the work we did morphed over to Blazetrak. The value wasn't just monetary--we gained experience and relationships, too.