A Franchise Breathes Life Into the Casket Business

When Nathan Smith was in high school and college in the mid-1980s, he volunteered at a summer camp for children with muscular dystrophy. It was gratifying work, and the Wichita, Kansas, native developed deep friendships with campers. But it was also heartbreaking.

"Unfortunately, we also buried a lot of kids," he says. "It was really frustrating for me to see how some families were being handled by the funeral homes and, even more important, the lack of options available to them. These were vibrant 12- and 13-year-old kids being buried in drab, gray caskets."

This was the impetus for Smith's 'Til We Meet Again custom casket store, which he opened in Wichita's Towne West Mall in 2009. The company is able to turn around a personalized casket in one or two days, adding family photos, timelines and graphics to the exteriors, or dressing up the interiors with leather, camouflage or leopard print. There have been coffins with poker motifs and odes to the rock band Kiss, as well as models designed for firefighters, military vets, bikers, farmers and more. The company offers licensed designs featuring all Major League Baseball teams and most NCAA Division I schools. It can even turn personal items like golf clubs, shotguns or a prized high-heel shoe into urns, or create jewelry and picture frames infused with cremains.

Macabre as it may seem, custom burial is resonating with baby boomers and younger generations reared on self-expression and turned off by the somber mood of traditional funerals.

"We're not only helping an industry that needs change, we're helping break the taboo about caskets," says Smith, who opened a second location in 2011 in Hutchinson, Kansas, and is now franchising 'Til We Meet Again. The company has commitments in Florida, Texas and Arizona, and Smith says there is serious interest from all over the country.

Smith took some 20 years of research and soul-searching to develop his business model. He says his frustration with the funeral industry boiled over in 1993, when he was unable to fulfill a promise to a good friend. That year, AJ, one of the first boys he worked with at the muscular dystrophy camp and who had been the best man at Smith's wedding, succumbed to the disease.

"It's not uncommon for kids with MD to attend five funerals of their friends per year. So we had talked about his death quite a bit," Smith says. "One thing he said was that he wanted a red casket. It was very important for him." 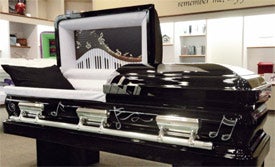 But when he escorted AJ's family to the funeral parlor, they were told red caskets didn't exist; the choices were white, gray, black and baby blue--none of which expressed AJ's spirit. Pressed further, the funeral director said they could special-order dark blue, for which the family begrudgingly paid an extra $1,000.

However, when Smith showed up for the funeral, his friend was laid out in a baby-blue model. The dark blue, the funeral director said, had been discontinued; asked about the extra $1,000, he said the casket had already been purchased, and walked away.

"If the family hadn't been there," Smith says, "that funeral director would have lost some teeth."

Smith, who traveled for work, began visiting funeral homes and casket stores in every city he visited. Over time, he determined two things: funeral directors were salespeople who often misled grieving people into spending more than necessary, and casket retailers were often in hard-to-find or inconvenient locations. "With caskets, people have to know you're there before they need you," he says.

When Smith finally had the financing and courage to open his first store, he put it in a popular mall--a decision that, after four months of watching customers walk by and turn up their noses, began to feel like a bad choice. That's when he grabbed a small video camera, took a stroll through the store pretending to be a curious customer and put the result on YouTube, under the title "Death Comes to the Mall." The clip spawned dozens of calls from local media and television producers and was even mentioned on The Tonight Show with Jay Leno. Traffic at 'Til We Meet Again doubled, sales took off and Smith has never looked back.

Typically a family comes in, talks about their loved one's passions and hobbies and creates a design with the staff. A couple of hours later, the store e-mails a rendering of the casket to the family for approval. The caskets are fabricated in Wichita and shipped to the funeral home. Because there is no inventory to warehouse, Smith estimates that his franchises will cost less than $100,000 to open.

But be warned: Salesmen need not apply. "No salespeople are allowed in our stores or system," Smith says.

"If someone comes to us and says they're a salesman, we don't look at them seriously. I will literally lose a possible purchase by telling people the truth. I'd rather they walk out with nothing than convince them to buy something they don't need."

Indeed, Smith has a dual goal: to build a great franchise system and to reform the funeral industry, so that kids like AJ can have something as simple as a red casket. "Funeral directors absolutely despise us," Smith says. "But we're not really their competitor. We're an extension, offering the family what they really want. Isn't that what it should be about?"