By Mikal E. Belicove January 16, 2012
Opinions expressed by Entrepreneur contributors are their own. 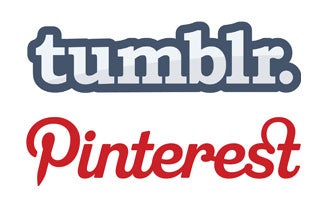 As email and instant messaging loses prowess among users, social networking sites are stepping in as a primary communication channel for some users. And while Facebook continues to reign supreme, emerging sites like Tumblr and Pinterest are taking off fast -- making them all the more fruitful for social media marketers.

Here's a look at some of the Web's rising stars:

Google's social networking platform Google+ climbed to 25 million global users in less than a month and now boasts more than 70 million registered users. That's pretty impressive considering it took Facebook three years to attain that number, and Twitter didn't hit the 25-million-user mark until it had been in business for 33 months.

Related: Why Your Small Business Should Hangout on Google+

Pinterest, an online pinboard that invites its members to "organize and share things you love," saw a 512 percent increase in the time (72 minutes on average) its users spend on the site between May and October, according to a December comScore report called "It's a Social World: Top 10 Need-to-Knows about Social Networking and Where It's Headed." Meanwhile, Tumblr, the site which touts itself as "the easiest way to blog," reported its users spent 42 percent more time, or 82 minutes on average, with the site during the 12 months that ended in October.

Related: How Social Media Will Change in 2012

Similarly, Tagged, a San Francisco-based networking site that allows its members to play games and share tags and virtual gifts with other members, users spent nearly two and a half hours on average at the site, for a 25 percent increase.

Other countries' social sites are also picking up the pace. In October, Chinese microblogging site Sina Weibo logged a year-over-year increase of 81 percent, with visitors sticking around for just over an hour in October, says comScore. Badoo, a multi-lingual social networking site out of London showed a 64 percent uptick in unique visitors over the one-year period. Odnoklassniki, a Russia-based social network, attracted visitors for six hours for a 36 percent increase.

While these figures pale in comparison to Facebook users, who spent an average of six hours on the site in October 2011, up 40 percent from the same month a year earlier, a shift is certainly beginning to take shape.

Does your business have a presence on an emerging social site? What's your experience so far? Leave a comment and let us know.