President Obama will deliver arguably his most important speech of the year tonight at 9 p.m. EST, and small-business owners and entrepreneurs will be listening closely to hear if their concerns will be addressed.

Tax policy, access to credit, health care, unemployment and government regulation top the list of political issues that will have the biggest impact on business, according to a January survey of 1,022 small-business owners conducted by Manta, an online small business community. (See these stats in the infographic below.)

Molly Buchanen, for one, would like to see some relief in the cost of health care, federal and state taxes and the still tight credit markets. But the co-owner and vice president of Buttercup Cheese, in Central Square, N.Y., is skeptical that Congress will act even if Obama touches on these issues tonight. “It is kind of hard for President Obama to get anything done,” said Buchanen whose grandparents started the cheese distribution company in 1969. "Nobody wants to work together; they are all sitting on their own side of the fence so to speak." 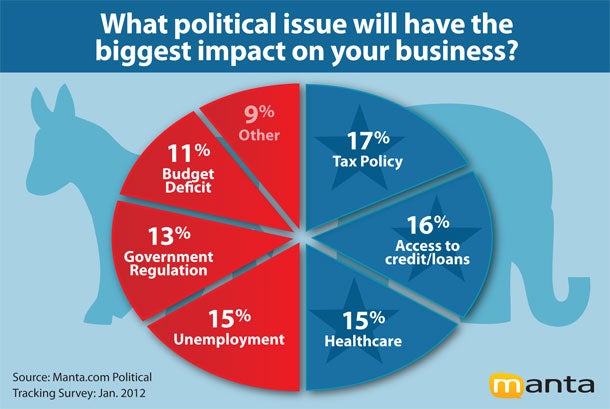 The Obama administration has remained tight lipped about the content of the speech, but that hasn't stopped small-business experts from putting together wish-lists. Here is a rundown of what small-business owners may hear in the President's address tonight.

That's long been the view of Rohit Aurora, the President and CEO of Biz2Credit, an online marketplace that pairs small- and mid-sized businesses with lenders. After consulting with the administration officials for the past four or five months, Aurora says small businesses and startups' access to capital will be one of the top three or four economic issues in the address.

Aurora does not have any direct insight into the content of the President's speech, but he does have thoughts his own. For example, the Small Business Administration's Express and Microloan programs could be streamlined, providing easier access to working capital for startups, he says. Meanwhile, Todd McCracken, President and CEO of the National Small Business Association, supports increasing the amount that credit unions are permitted to lend to small businesses and easing the restrictions on crowd-funding, according to a statement released Friday.

Health care costs: For Molly Buchanen, the rising cost of health care is a top concern. The cost of insuring Buchanen, her husband and her eldest son went up $150 from December to January. “We are paying more than our mortgage payment to have health insurance, and I think it is quite ridiculous,” said Buchanen.

In addition to facing rising health care costs in the coming year, many small business owners are nervous and uncertain about what the health care reform holds for them. The International Franchise Association says that the employer mandate included in the health-care reform law should be repealed. It “forces many multi-unit franchisees who have more than 50 full-time equivalent employees to pay penalties, thereby discouraging and disincentivizing the creation of new jobs,” said Stephen J. Caldeira, the president and CEO of the International Franchise Association, in a letter to the President sent Monday.

Obama's proposal to merge six government agencies into one: Two weeks ago, President Obama announced a proposal to merge the Small Business Administration with five other agencies in an effort to decrease burdensome regulations and an overly bureaucratic government. Advocates voiced concern that having one government agency to serve businesses of all sizes would steamroll small-business concerns. “Small-business owners have viewed with no lack of skepticism the President's proposal to consolidate the SBA and five other trade-related agencies into one massive federal agency,” said McCracken, head of the National Small Business Association, in a statement.

Related: A Complete Resource Guide to Start a Business in 2012

Payroll-tax cut extension: Just before the Christmas holidays, a temporary extension of the payroll tax cut was passed by Congress and signed by President Obama after weeks of political brinkmanship. Without legislative action, the discounted Social Security tax rate of 4.2 percent would have reverted back to the normal 6.2 percent at the start of the new year. The compromise agreed to by the House and the Senate extended the payroll-tax holiday until Feb. 29, 2012. President Obama will likely put pressure on members of Congress to come up with a full-year tax-cut holiday.