By Diana Ransom February 2, 2012
Opinions expressed by Entrepreneur contributors are their own. 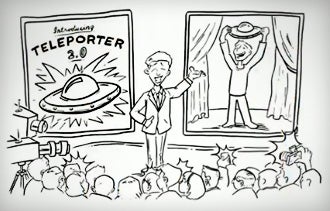 As you huddle around your TV this Sunday watching the Super Bowl -- and some really choice commercials -- you may also be thinking about starting a business. At least that's what the Ewing Marion Kauffman Foundation hopes.

For the first time, the Kansas City, Mo.-based nonprofit dedicated to supporting entrepreneurship is airing a commercial during the Super Bowl. The goal of the 30-second spot is inspire those thinking about entrepreneurship to take action.

"It is more important than ever to bring more people into the fold -- to get more people to try and start businesses," says Wendy Guillies, Kauffman's vice president of communications. The reason is simple, she says, hinting at the popular factoid: All the net new jobs created in the U.S. in the last 30 years were generated by companies that were less than five years old.

The ad will direct business owners and would-be entrepreneurs to a newly launched microsite called WillItBeYou.com. That site will then point people to start-up resources, which are organized under categories like "inspiration," "mentoring" and "networking." Those resources are all housed on about 17 other sites like the Angel Resource Institute and the Startup America Partnership.

"It's our way of trying to make learning about starting up easy and a one-stop-shop that people can find what they need," says Guillies.

It may come as a surprise that a nonprofit would choose to broadcast its services during the most expensive ad event of the year. Comcast's NBC Universal -- the network that's broadcasting this year's Super Bowl -- reportedly collected as much as $4 million, or $3.5 million on average, per 30-second ad spot, which have already sold out. But Guillies says Kauffman's spot cost less than 10 percent of the going rate, and is running in only four markets: New York, Washington, D.C., San Francisco and Kansas City.

Kauffman also saved money on the production of the ad, which is an animated illustration that depicts a person having a light-bulb moment and then going through the steps of starting up. The nonprofit developed the spot in-house rather than asking a high-priced agency to produce it.

But advertising during the Super Bowl isn't about saving money, it's about eyeballs. If this year's sporting extravaganza is anything like last year's, more than 100 million people will tune in -- and you'd better believe they'll be watching the commercials.

Do you think Kauffman's Super Bowl commercial will inspire would-be entrepreneurs? Let us know in the comments section.