By Dinah Wisenberg Brin February 3, 2012
Opinions expressed by Entrepreneur contributors are their own. 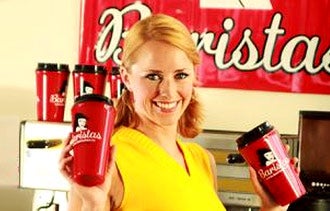 Baristas Coffee, a sort of Hooters on caffeine, caters to those who like their coffee hot and their servers hotter -- you know, customers who enjoy cheesecake with their java. Let's not be coy about it, though, because the attention-seeking Seattle franchise certainly isn't.

Baristas, which plans to open new shops nationwide, is developing its own reality TV series to promote its brand and holding auditions to cast what it refers to as "hot young girls as servers."

The company freely admits that it distinguishes itself from Starbucks and other competitors by hiring "attractive female baristas in entertaining costumes" at its drive-through shops in its home state, where it has six locations, and in Texas and Florida. Its website depicts women clad in fishnet stockings, bustiers and other skimpy garments, one of whom also appears to be wearing Minnie Mouse ears.

Filming is scheduled to start this month.

"The show profiles the fierce competition between baristas for top shifts as well as the opportunities and challenges faced by the management while expanding the business," the company said in a release.

It's unclear what television network will broadcast the reality show, which is targeted to viewers younger than age 30. In a statement, CEO Barry Henthorn said M&M Productions, known for a poker series on FOX Television, would produce and Mark Teitelman, whose credits include "Hoosiers 2," would direct the show.

"The show will be a character-driven, drama-filled adventure and a true soap opera," M&M CEO Mark Mayer said.

In recent years, a number of reality shows have elevated the profiles of businesses, including "Cake Boss," "Pawn Stars," "Ace of Cakes" and "American Chopper." Many others, though, have been short-lived or forgettable.

A "Baristas" casting call earlier this week at its soon-to-open location in Tampa didn't exactly draw crowds, although that may not be an indicator of the show's potential. The Tampa Bay Times reported that the tryouts there attracted a "diverse pool" but lines didn't stretch around the block, as organizers had hoped.