By Carol Tice February 6, 2012
Opinions expressed by Entrepreneur contributors are their own. 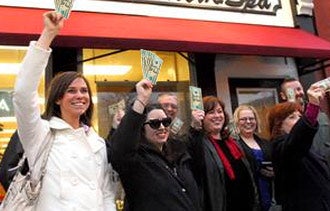 Customers participating in a cash mob at a salon in Painesville, Ohio

You've probably heard of flash mobs -- groups of people who use social media to plan to appear in person at a chosen location at a particular time to sing a song, hold mock lightsaber battles or take some other random action. Fun, but frivolous.

Another iteration of this meet up is of much more interest to entrepreneurs. It is the cash mob -- a group of shoppers who agree to patronize a local business at a particular time and spend at least $20 apiece to support their hometown merchants.

Cash mobbers are usually advocates of the buy-local movement who don't like how big chains have emptied some downtowns. So they're voting with their dollars, mostly for small businesses.

Although these communal shopping events are oftentimes organized by individuals, cash mobs have been convened by companies looking to give back to their community. An example is candle company Scentsy, which celebrated its fifth anniversary by giving $100 to each of its 1,000 headquarters-based employees to spend in local shops in their home town of Meridian, Idaho.

Here are seven ways to get a cash mob to visit your shop:

Related: Expert Live Chat: How to Ramp Up Sales

What tips would you add for attracting a cash mob? Leave a comment and let us know.

Corrections & Amplifications: Scentsy is located in Meridian, Idaho. An earlier version of this story misstated the company's location.