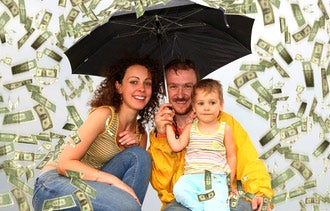 Glenn Smith faces a common problem. Founder and owner of Micro Integration Services Inc., a New Jersey-based computer and software consulting firm, Smith would like his son, who works in the business, to take it over some day. But Smith also has a daughter who's not involved in the business, and wants to make sure she gets her fair share of his estate, too.

Passing on a family business can get tricky when one child works in the business and another does not, especially if the majority of the owner's wealth is tied up in the business. That's not uncommon. "This is more of a typical situation than an atypical one," remarks David Levi, lead managing director of CBIZ MHM LLC, an accounting and business management services firm in Minneapolis, Minnesota.

The life insurance option
If this sounds like your situation, there are several options for making sure your children are treated fairly. One is to simply take out a life insurance policy on yourself and name the child not involved in your company as the beneficiary.

Unfortunately, notes Louis Pashman, a founding partner of the law firm Pashman Stein in Hackensack, New Jersey, this isn't always workable. For starters, it assumes your health will allow you to qualify for life insurance, and that you can afford the premium.

Figuring out how much insurance to buy is another challenge. Your business may be worth $2 million today but could be worth $10 million -- or nothing at all -- by the time the insurance policy pays out. "Assuming it's affordable, you might try buying a larger policy than you need and naming both children as beneficiaries, albeit perhaps not equal beneficiaries," Pashman says. "Then you can adjust the percentages over time if you wish."

Another possible wrinkle: The child inheriting the business may conclude he's actually receiving the lesser deal. "He's getting an asset he has to maintain and nurture," Pashman explains. "All the other child has to do is throw their money into a bank or brokerage account." If you're sympathetic to that concern (you may not be), you'll just have to decide what amount of insurance you consider fair.

Sell the business to the interested child
If insurance isn't available or is too costly, you could have the child involved in your business buy it, perhaps piecemeal over time, out of his or her salary. As that happens, the proceeds become part of your estate, which you can divide equally among your children upon your death.

Give the business to both children
If neither of the first two options appeals, you could just leave your company to both your children and let them divide the spoils. Consider leaving 51 percent to the child who will run the business, given his or her management responsibility, and 49 percent to the other. Then, draft an agreement that the former will buy the latter's shares on a predetermined schedule.

"One of the upsides is that you're not taking any cash out of the business to pay life insurance premiums that maybe Dad [or Mom] can't afford," Levi notes. "The bad news is the children are hitched together. If the controlling shareholder is not successful with the business, the other child will pay a price as well."

Susan Johnson, owner of Susan's Healthy Gourmet, a prepared-foods delivery business in Southern California, is willing to accept that risk. Her daughter, who works in her business, already owns 1 percent of the company. Johnson's will specifies that if anything happens to her, the remaining 99 percent gets split evenly between her daughter and her son, who isn't involved in the company.

"As the majority shareholder, my daughter will have the ability to control where the company's money goes and how much the business needs to sustain itself and pay employees, including her salary," Johnson says. "Any additional profits would be split evenly between her and my son."

Smith is considering a similar solution. He says that his son, after nine years with the company, has sweat equity in the business. Smith is contemplating giving his son that equity now. Then, if something should happen to Smith, his remaining shares would be split evenly between his son and daughter.

Whatever approach you consider, Pashman suggests discussing it with your children, who may have good ideas, too. The child running the business, for example, might be willing to pay a sibling to do consulting work to help even things out.

"I've even seen instances where the business is so successful that the involved child has had no problem, simply on a personal basis, giving money to the non-involved child, in the form of a gift, to equalize the situation," Pashman says. "As long as the business remains successful and the people involved remain a family, you can usually work through these things."