A Dad's Cautionary Advice Led to a Growing Family Business 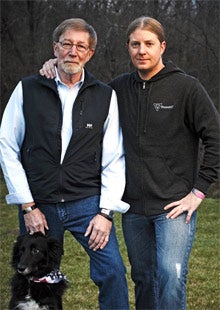 When Edward Wimmer was in college, a close call taught him to think twice about ignoring his dad's advice. His father, Mike, cautioned him to "wear some form of ID" while training for a marathon.

"Like any good 21-year-old, I dismissed his concerns," Wimmer says. A week later, an oncoming truck forced him to jump into a ditch during a training run. "I faced two realities," he says. "First, I was almost hit by a truck and nobody knew where I was. The second reality? My dad was right."

After graduating in 1999, Wimmer--whose father is an entrepreneur (as was his father before him)--holed up in his dad's basement and, backed by credit cards, started making athlete-friendly ID tags, modeled after military dog tags. He and his dad partnered, calling their Erlanger, Ky.-based company Road ID. Now, 13 years later, they're selling information-engraved Velcro wrist and ankle models, IDs that strap onto running shoes and even ones that attach to dog collars.

Road ID will engrave its tags with anything a customer chooses, but recommends including vital statistics and inspirational mantras to help lift spirits midworkout. An interactive version gives first responders access to additional information, such as notes on allergies and health insurance.

To help responders understand how to read Road ID tags during an emergency call, the Wimmers asked emergency medical services educator Greg Friese, who works for Shrewsbury, Penn.-based CentreLearn Solutions, for ideas on how to connect with first responders and for feedback on their outreach campaign. Friese readily agreed to help.

"I was already a Road ID user," he says. "In my work as a paramedic (and my wife is an ER nurse), I know there is nothing worse than having a John or Jane Doe as a patient."

But it seems the tags have taken on a greater function than just a form of ID: According to Wimmer, loyal customers are wearing them as a visual way of saying, "I'm active."

"Today people are wearing it as much for a lifestyle statement as anything," he says. "One customer told me about how when she was at a conference she saw three people wearing Road IDs, and then she knew who she was going to ask to join her on a run in the morning." 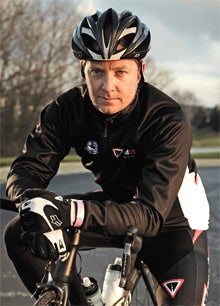 Road Warrior: After a near-accident while training for a marathon, Edward Wimmer developed Road ID, a line of identification gear for outdoor athletes.

In 2011 the online retailer diversified its reach by placing small kiosks in sporting goods shops. Cadence Bikes & Multisport, a triathlon shop in Sandy Springs, Ga., was one of the first to sell Road ID apparel, gift cards and other gear. Brochures distributed through the shop offer customers a discount when they order ID tags online; Cadence gets a cut of each sale.

Cadence's Michael Berger, co-owner with Patrick Neely, says customers like trying on the various styles of bracelets in his store. "Every cyclist wears one of these," he notes. "I wear mine all the time. It shows who you are. It is like you are saying, ‘I am a cyclist.'"

Wimmer won't divulge company revenue, but he says sales have increased an average of 50 percent every year since 2002, and that the company has outgrown its Northern Kentucky headquarters three times. He expects that growth rate to continue for the next three to five years.

Road ID relies on a savvy mix of promotions to fuel that growth. The company sponsors more than 8,000 running and cycling events and offers social media promotions through Facebook, Twitter and e-mail; for example, after an order is placed, the customer receives a discount code that can be shared liberally for up to 30 days. The loyal customer base helps by touting the product on blogs and in testimonials.

"We are stunned nearly every day with customers reaching out to tell us how Road ID did the talking for them in an accident," Wimmer says. "If we've helped just one person … it will be worth all the blood, sweat and tears [it took] to get here."