Four Powerful New Cameras That Are Good for Business

By Jonathan Blum February 29, 2012
This story appears in the March 2012 issue of Entrepreneur. Subscribe »

For entrepreneurs who rely on having a camera handy (landscapers, contractors, realtors, inspectors--we're talking to you), the optics embedded in today's smartphones won't cut it. To wit: The 8-megapixel lens in the iPhone 4S falls short of the ultra-crisp 12-megapixel images captured by today's average digital pocket camera. The shooters highlighted here boast interchangeable lenses, can capture audio and (with a multi-GB memory card) are able to shoot minutes--not seconds--of HD video at 1,080 dpi. Take that, Droid. 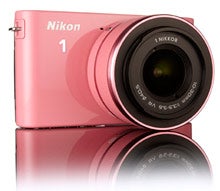 Photos© Devon Jarvis; styling by Mai Tran
Pro Shooter
Nikon 1 J1 ($650)
Credit Nikon for putting digital SLR-camera technology into the palm of your hand. The fist-size 10.1-megapixel J1 offers first-rate optics (proving that more megapixels don't automatically mean better photos), the ability to grab a still image out of a video shoot and remarkable image stabilization and autofocus. Swapping in a 30-110 mm zoom or 10 mm wide-angle lens (at an extra cost) adds to the Nikon's versatility. 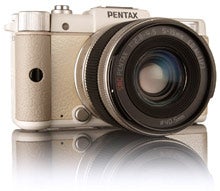 Mighty Mite
Pentax Q with one lens ($750)
Roughly the size of a deck of playing cards, the Q is incredibly small for an interchangeable-lens camera. But fear not: It takes seriously big pictures. What's more, the 12.4-megapixel sensor is capable of producing crystal-clear stills and HD video. However, its price can easily cross the $1,000 mark if you covet multiple lenses. 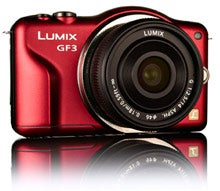 Best Value
Panasonic Lumix GF3C ($500)
Of the cameras here, the 12.1-megapixel Lumix delivers the best value and the easiest-to-master touchscreen control system, along with simple-to-use video tools. The fact that Panasonic packages the GF3C with a 14-42 mm lens makes it tough to beat for the price. 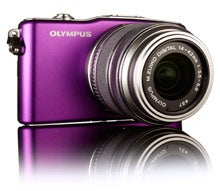 Audio Star
Olympus E-PM1 ($450)
Olympus packed years of experience building small, multilens cameras into the E-PM1, which captures solid--if average quality--12.3-megapixel images. It also comes with clever features such as an accessory port for lights and flashes. The big surprise: the E-PM1's built-in stereo microphone records rich audio for its diminutive size. One bummer: It took us a while to figure out the menus and controls.