Freedom in a Fashion Franchise

By Jason Daley March 17, 2012
This story appears in the March 2012 issue of Entrepreneur. Subscribe »

When Ken Petersen and Tom Brady were attending the fire academy together in the late 1970s, the two friends from Vacaville, Calif., never imagined that 30 years later, their job would involve checking out each other’s butts. But these days, as the heads of fashion boutique franchise Apricot Lane, taking a peek at labels--no matter where they may be--is second nature.

So how did two firemen go from hooks and ladders to dresses and jeans? During the ’80s and ’90s, while off-duty, they ran a small chain of furniture stores, which they eventually sold to launch the Country Clutter collectibles franchise. In 2005 sales tanked, and the partners started hunting around for another franchise concept. What they found was fashion. "We realized there are thousands of tiny boutiques and lots of giant department stores, but nothing in the middle," Petersen says.

Apricot Lane was designed to fill that niche, operating its franchises as true boutiques: Owners are granted a free hand to sell whatever they choose--usually in very limited quantities--while capitalizing on economies of scale and franchisee networking. "Flexibility and franchising--you usually can’t say those two words in the same sentence," says Petersen, who opened the first Apricot location in 2007. "You have to allow franchisees to buy according to local demographics and taste. Things are very different from a fashion perspective between New York and North Dakota."

So far, Apricot Lane has opened 64 locations, including stores at Disney theme parks, and there are plans to open 50 more in 2012. We asked Petersen about his passion for fashion. 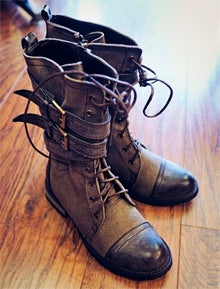 "Franchised boutique" seems like an oxymoron. Can your brand be both?
In the beginning, we tried to keep tight control on what our franchisees sold. They had to get approval to buy items. But we realized quickly that we were approving everything. We have corporate buyers in our headquarters, but we found we have great buyers all over the U.S.--they’re called franchisees. We have a monthly conference call about buying and talk about what’s working. All our best finds come from franchisees.

Our customers don’t want to see racks and racks of the same clothes. We have signs that say, "Buy it now, because it won’t be here next week." That keeps customers coming in more frequently.

Why have Disney locations?
We now have two stores with Disney, in Anaheim, Calif., and Orlando, Fla. The sales there are great; there is such a huge volume of national and international customers coming into those stores, lead flow is through the roof right now.

Biggest mistake so far?
In early 2011 we got kicked in the tail a little. We grew faster than I could support, opening eight to 10 stores in a month. We got consumed with new people coming into the system, trying to get their stores open and their people trained. It overwhelmed our staff, and existing franchisees started complaining that we were slower to respond. They were used to us getting back to them in a few minutes, not a few hours. You catch those little signals, so we brought in new people, including a new buyer and a new program developer. 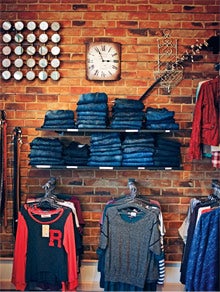 What’s your best marketing tool?
Each of our stores does fashion parties two or three times a week. A hostess invites friends or colleagues from work, and they come into the store and have drinks and hors d’oeuvres or coffee and dessert. There are raffles and a 20 percent discount. It’s amazing how many women it gets into the store for the first time.

You do a lot of philanthropic work.
A few months ago, my family hosted a woman who had been involved in human trafficking in Cambodia, and I realized it’s one of the fastest-growing evils in the world. We began financing an organization in Cambodia that rehabilitates girls involved in trafficking. But they really need income, too. So we leased a building last December, and we’re setting up a factory that will give the girls great jobs and pay way more than they could make otherwise. We’ll sell what they make in our stores.