If your name's Frostee Rucker, some might say getting into the fro-yo biz was in the cards.

But Rucker, who makes a living feasting on quarterbacks as a defensive lineman for the Cincinnati Bengals, says it wasn't destiny so much as a compelling investment opportunity that prompted him to buy into two Orange Leaf Frozen Yogurt franchises in Cincinnati. One of those shops is due to open soon in a high-profile riverfront development called the Banks, near the Bengals' stadium.

Rucker aligned with Oklahoma City-based Orange Leaf, an upstart that has been aggressively scaling up to compete nationally against the likes of Pinkberry, Menchie's, Red Mango and Yogurtland. Orange Leaf opened 76 new stores in the last year, and as 2011 drew to a close, it had 124 stores in 30 states (including 12 corporate affiliates and 112 franchise locations), with 45 additional units under construction.

That prompted some on-the-spot due diligence. "We sat in the store for four hours, maybe more, watching people come in and out and chatting with the manager," he says. "Then we made some calls, talked to the Orange Leaf people and we were sold." 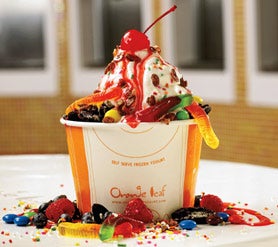 Rucker isn't the only big-name sports figure to be sold on Orange Leaf. University of Kentucky basketball coach John Calipari owns a stake in seven stores in Lexington, Ky., where by virtue of guiding one of college basketball's most hallowed programs, he has become one of the city's highest-profile citizens--and a fro-yo ambassador of sorts. "I'm not a yogurt guy--never have been," he says. "But when I tasted [Orange Leaf's product], I said, ‘Wow, this stuff is delicious.'" Not long after that initial visit, Calipari joined the Orange Leaf franchise investment group in Lexington. And he continues to put his mouth where his money is. "I'm there three or four times a week, because somebody's got to do quality control," he says with the hint of a chuckle.

Flavors like wedding cake and brownie batter are enticing, and so is Orange Leaf's growth. The company has a rapidly expanding franchise footprint that within the last 18 months has grown by 600 percent, plus an aggressive expansion strategy for the U.S. and abroad. Then there's the absurdly affordable $15,000 upfront franchise fee to gain entry into one of America's hottest retail food segments, where annual sales are estimated at $700 million to $1 billion. Sales by the seven largest frozen yogurt franchises increased a combined 11.5 percent in 2010, according to Chicago market research firm Technomic.

"I'm a basketball coach, but I'm also an investor. And this," Calipari says, "is a good investment."

When it comes to the Xs and Os of the fro-yo business, Calipari sees in Orange Leaf a company that's well-equipped to go head-to-head against larger, more established franchises. "Believe me, I've looked at the competition, and Orange Leaf holds its own," he says. "The turnkey setup, the quality of the product, the people and the vision at the corporate level--it's all there."

Both Calipari and Rucker say the early success of their Orange Leaf franchises has them motivated to expand. And they're not alone. "Half of the stores we have under construction are with existing franchisees," Orange Leaf CEO Reese Travis says."They do one store, figure it out and come back to do more."