By Daniel Bortz March 6, 2012
Opinions expressed by Entrepreneur contributors are their own.

For many young, first-time entrepreneurs, tapping parents for startup capital is the closest they'll come to landing investors. But what do you do if the bank of mom and dad can't or won't subsidize your brilliant business idea? Consider crowdfunding.

Websites like Kickstarter, IndieGoGo, and PeerBackers follow a crowd sourcing business model, wherein members sign on as backers and supply the capital necessary to start a business or product. In return, these investors typically receive tangible rewards like special access to a screening, a T-shirt or a sample of the proposed product.

Last year, when Sam Gordon, 27, and his business partners used Kickstarter to raise cash for their Menlo Park, Calif.-based startup -- a smartphone stand maker called the Oona -- he offered to hand over early prototypes of the device to investors who gave a minimum of $25. The move served two goals, says Gordon: the Oona raised more than $130,000 through the site and they got a treasure trove of beta testers (just under 4,000) to try out the device. “We had the idea for our product, but we didn't have enough money to go and start making it and selling it,” Gordon says. “We also wanted to see if people would like it.”

Though Gordon found success, plenty of aspiring entrepreneurs aren't so lucky. In 2011, 46 percent of projects listed on crowdfunding sites failed to reach their stated goals, according to data from Massolution, the research and advisory arm of Crowdsourcing.org, which tracks the category.

The good news? Age tends not to be an issue among crowdfunding investors. "Young people have proven they are able to raise money like anyone else," says IndieGoGo's CEO and co-founder, Slava Rubin. "The key for anyone is to have a good pitch, be proactive and find an audience that cares."

But you still have to put in the work. Here are four tips to help young entrepreneurs stand out and, in turn, land startup capital:

Engage with video
Video can immediately humanize a project or business, says Kine Paulsen, the 24-year-old co-founder of Ingri:Dahl, a 3-D glasses maker, who used Kickstarter in December to acquire more than $10,000. "It shows investors that there are real people behind the business," says the Los Angeles-based Paulsen.

Your two to three minute video should offer a description of your product or business and why it should exist. Also, include a note about you and why you're capable even though you're young. Paulsen suggests adding some background on how the website works, since you'll likely share the page with friends and family who might not understand what crowdfunding entails.

Build a fan club
To build your business's credibility on the sites, your inner circle -- that is, your family, friends, Facebook and email list -- needs to fund the first 30 to 50 percent, according to Rubin. From there, you'll want to spread the word as much as possible, so target tastemakers on blogs, YouTube, Twitter and other social-media outlets.

As an added way to build trust, send out regular updates over the course of your campaign. "The updates are crucial, because they enable you to establish a connection with your backers," says Paulsen from Ingri:Dahl. "If you connect with them, they'll help you as much as they can."

Offer perks
Like Gordon found, incentives can go a long way with investors. Common perks include: a discount, exclusivity or first-dibs on a limited edition offering. More than 90 percent of campaigns on IndieGoGo that reach their target goal offer perks, says Rubin. 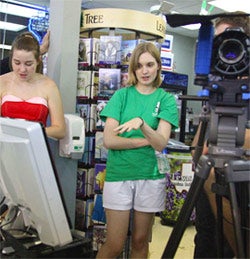 And don't be afraid to skew toward the unconventional, says 19-year-old Emily Hagins who twice ran a campaign on IndieGoGo to raise money for the production and post-production of her vampire film My Sucky Teen Romance. "We told people they could have something named after them in the movie if they gave us a certain amount," says the Austin, Texas-based Hagins who recently sold her film to MPI Media Group's Dark Sky Films. "I wanted people to feel like they were really a part of the project."

Get feedback
Before launching a campaign, get advice from those whose projects you admire. Then go for a trial run. At Kickstarter, for example, you can preview your project page before it goes live. Be sure to share that link with a few close confidants -- using the feedback you get to tweak your page or product accordingly.

Daniel Bortz is a freelance writer based in Washington, D.C. He's written about personal finance, careers, small business and entrepreneurs for publications such as Money magazine, CNNMoney.com, TheFiscalTimes.com, USnews.com.

How to Crush Your Holiday Debt

How to Crush Your Holiday Debt