The Office's Five-Step Guide to a Disastrous Store Opening

By Carol Tice March 7, 2012
Opinions expressed by Entrepreneur contributors are their own. 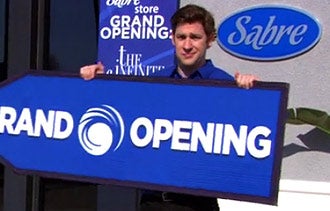 A retail store opening is a big opportunity to generate excitement for a new business. But so often, the chance to create buzz is lost due to lack of planning or weak execution.

Despite elaborate (and frequently hilarious) brainstorming sessions ahead of time with type-A British boss Nellie Bertram (guest star Catherine Tate) on how to create a cool, tech-oriented chain of stores that mimic the Apple Store, the opening day is a disaster -- offering vital lessons for entrepreneurs on what not to do.

Here are the five major flubs committed by The Office crew that had customers stampeding for the doors:

1. Products aren't ready. The biggest blunder of the day: Sabre reveals their new triangular tablet computer, The Pyramid, will only be wireless-enabled next year. Really? You don't want to open the doors with a sub-standard product that lacks key features.

2. Media is mishandled. The Sabre team has only the dimmest idea of how to get the media excited about their store opening. They loudly proclaim that all bloggers are fat and at one point misidentify a key female tech-magazine journalist as a man. This flub means big trouble. The last thing you want is for a negative post about your store to go viral. If you don't know who the key influencers are in your industry and how to engage with them, hire a pro to help you with publicity and manage your media contacts.

3. Scant employee training. When Jim Halpert (John Krasinski) wants to make a call to Pam (Jenna Fischer), he ignores Sabre's Pyramid, which he doesn't really know how to use, and whips out his old cellphone. This is promptly snapped by a blogger for their fail blog (a term Bertram is only dimly familiar with).

4. Alienating customers. When a group of elderly customers come into the store, they are loudly ushered out and told they are too unhip and aren't the customers the store is aiming to attract. This is a major gaffe, because when you first open a store, you may think you know who your best customers will be, but you could be in for a surprise. Opening day is a time to welcome everybody and learn about their needs so you can find out more about who your customers really are. Elderly tech users might buy more support or training services, so they kissed off some possibly high-margin up-selling opportunity here.

5. Under delivering. Visitors to opening day were promised an exciting presentation at a certain time. But that time comes and goes, as employee Ryan Howard (B.J. Novak), who had planned to do the presentation, chokes and flees the scene rather than deliver it. Jim rises to the occasion, but the never-rehearsed event is a debacle full of hokey clichés, and concludes with Jim falling off the stage.

What makes a great store opening? Tell us about opening days you've held -- or attended -- that went well.