How Dermalogica Is Giving Women Entrepreneurs a Boost

By Diana Ransom March 9, 2012
Opinions expressed by Entrepreneur contributors are their own.

Dermalogica founder Jane Wurwand has an idea for improving the health, education and welfare of households across the developing world: Invest in women entrepreneurs.

The skincare mogul just celebrated the one-year anniversary of joinFITE, a philanthropic program that seeks to give women-business owners in developing countries and in parts of the U.S. small loans to either start or grow businesses. The program was launched in coordination with the San Francisco-based nonprofit microlender Kiva.org using $500,000 in funds set forth by the Dermalogica Foundation.

In the last year, FITE has helped fund 10,000 women-owned businesses in countries like Pakistan, South Africa, Sierra Leone and Kenya, as well as cities including New York and San Francisco. And though Dermalogica put up the funds, Wurwand wanted consumers to choose which businesses would benefit. JoinFITE codes were printed on the inside of select Dermalogica products and on those from other joinFITE partners. To unlock the microloans, customers enter their codes at joinFITE.org.

Wurwand is thrilled with the success of the program, which she plans to expand this year. But she adds that the need is still so great. In many countries, she notes, entrepreneurial women suffer amid countless obstacles -- from not being able to access capital to not having the right of inheritance, among other things. To address these issues, she says, laws need to be changed and markets must be freed up and explored. But also, Wurwand thinks it would be impactful if the world's largest corporations threw their hats into the ring as well. 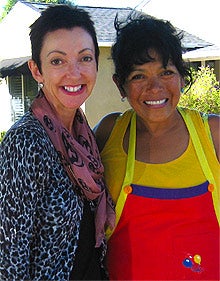 "We want this to serve as a blueprint for how to empower women with trade skills, and propel them to financial independence," Wurwand said at a panel discussion on women and financial inclusion at the United Nations yesterday on International Women's Day.

With banks returning almost nothing while Kiva offers a return of around 98 percent, Wurwand wonders if larger corporations might be putting their philanthropic money to work more effectively if they followed in FITE's footsteps. "For women in these countries, this is a hand up, not a hand out," says Wurwand, noting that women tend to plow their modest resources back into their families more readily than men.

To be sure, microloans aren't an ideal source of capital for small businesses, as they generally carry higher interest rates than bank loans. But for people in the developing world who don't have access to traditional banks or those in the U.S. who may have checkered credit histories, these funds can serve a lifeline for keeping a business afloat or just getting started.

Pam Flaherty, the CEO of the Citi Foundation and director of corporate citizenship at Citi, also sitting in on the U.N. panel discussion, added that microloans tend to last for shorter durations. So the interest rates may seem large on an annual basis, but most people repay the loans after three months, she says.

Do you think microloans are a good resource for entrepreneurs looking for capital in the developing world or in the U.S.? Leave a comment and let us know.

Corrections & Amplifications: The Dermalogica Foundation initially provided $500,000 to invest in women-owned businesses through Kiva.org. In the last year, the company has supported 10,000 women entrepreneurs. An earlier version of this story misstated these figures.