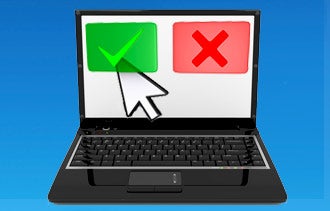 One of the first suggestions that digital and social media marketing consultant Kendrick "Kenny" Jahng makes to clients is to put their websites through a usability test. Case in point: A recent client, confident about the design and intuitive layout of his site, was shocked to discover that users were ignoring key aspects, even though the information was in bold type.

"They just didn't see those elements," says Jahng, founder of Livingston, N.J.-based Big Click Syndicate. "Which told us we needed to change the layout."

A common misperception is that going outside the company for objective user testing requires a large--and expensive--squad of people. But website consultant Tim Peter in Long Valley, N.J., says a handful of testers is sufficient. "You'll start to see what's wrong after three or four people go through the site," Peter says.

For less than $200, services such as UserTesting.com, OpenHallway and Beta Breakers can deploy web-savvy experts to scour a site and look for functionality issues, broken links and other problems, then provide feedback on ways the site can improve. The companies vary in their approach and pricing: OpenHallway charges a tiered subscription starting at $49 per month, while UserTesting.com taps a large network of testers who can be assembled to create specific demographic ranges for $39 per tester.

Jahng finds the most frequent issues his clients uncover through user testing are poor site navigation--often the result of a page being too cluttered--and poor search functions. "If there are problems, you'd better uncover them," Jahng says. "You only have eight to 15 seconds to impress a visitor before they leave."

Are We Slaves to Technology?

Why Digital Transformation is More About People Than Technology