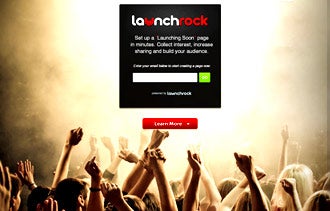 As a lead generator, it's hard to imagine anything better than your company's website--even if you don't officially have a product yet. That's what Eugene Woo, founder of Toronto-based online résumé builder vizualize.me, discovered when he turned to LaunchRock to build and host a "coming soon" page for his company.

"Before our product was ready, we wanted to gauge user demand, so we set up a LaunchRock page to collect e-mails and get people to share our site," Woo says. In two and a half months, he collected more than 200,000 e-mail addresses of people interested in his infographic résumé service. "It was successful far beyond our wildest imagination," he says.

The San Francisco-based firm debuted in February 2011 and by November was hosting pages for 4,600 customers who had captured 1.5 million e-mail addresses. Co-founder Jameson Detweiler is coy about how long LaunchRock will remain a free service and how it will make money. For now, though, LaunchRock is an easy way to throw out a trial balloon to see if your idea has potential.

What we think
The good: We clicked over to the LaunchRock website and filled out easy-to-use interactive forms that capture company information, lines of descriptive copy and links to background images and logos. Total time to a working web page: eight minutes.

The bad: We were on our own to make sense of the analytics and user data revealed; they're simply not intuitive.

In conclusion: Best to think of LaunchRock as a simple, temporary e-mail database builder until your real website goes live.