How Two Friends Turned a Crafty Hobby into a Business 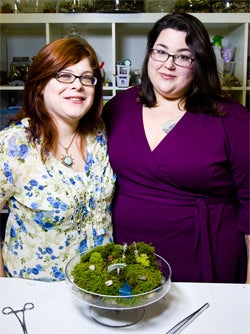 "Aha" moment: Childhood friends who had lost touch, Inciarrano and Maslow were reunited by a mutual friend later in life. They started getting together for craft nights, making greetings cards, bookmarks--whatever struck their fancy. "One of the many things we ended up making was a terrarium. Totally Michelle's fault; she had the whim," Maslow says. They both loved it and began playing around with themes for other terrariums. In 2010 they decided to start selling their creations.

What possessed them: "Not only is it fun, but it can be very therapeutic," Maslow says. "It can be great for corporate events. Terrariums have such a range of use and enjoyment."

The two were scrupulous with their startup: They consulted one of Inciarrano's college professors to double-check the horticulture and make sure "all the balances were where they were supposed to be," Inciarrano says, and considered many variations of the logo and company name until everything fit their vision.

From the ground up: After initially working from their apartments, the duo rented a 300-square-foot converted garage. They have since moved into a 900-square-foot store/studio in Brooklyn, where they offer workshops and sell their products. In 2011 they began selling online at TwigTerrariums.com; there are currently 19 products that can be ordered from the site and shipped nationwide. The duo started with a small personal investment, opening no lines of credit, and are proud to be (so far) debt-free. They have three employees to help manage shipping and administrative functions. Profits quadrupled in the first year of business. 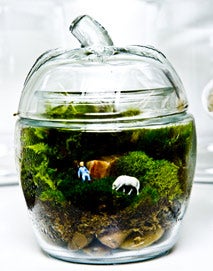 Little requests: "We've had everything from naughty to nice," Maslow says of the customized themes. People often send in photos of what they want re-created; themes have ranged from a parachuter stuck in a tree to a tiny doggy and kitty heaven as a gift for a woman who'd lost her pets.

Customers: The biggest market for Twig's creations is middle-age, middle-income families. "We have a lot of high-profile clients, as well as--I hate to say--hipsters," Inciarrano says with a laugh. The team offers training workshops in schools for underprivileged kids, and this spring they will work with the New York Botanical Garden on a "Little Landscapes" exhibit for 2- to 10-year-olds.

Marketing: Twig has not sought publicity, but has been lucky with word-of-mouth and press coverage, Maslow says. They keep up a newsletter and participate in events, including donating a terrarium to the GLAAD Media Awards ("a gay-arium," Maslow jokes). The terrariums are now sold in more than a dozen stores and through the Toledo Museum of Art.

Cost: Kits start at $15 to $25; ready-made terrariums at $45. Costs go up from there (even into the thousands), depending on labor, materials and intricacy of design.

Up next: Inciarrano and Maslow are focusing on the tasks at hand as their overhead grows and will publish a book on terrariums this spring.