Biltmore Estate's Award-Winning Winery is Worth the Trip

With a legacy that dates back 100 years, Biltmore prides itself on producing award-winning, world-class wines while greeting more than one million visitors each year. The winery is located on the legendary Biltmore Estate, a majestic 8,000-acre property in the Blue Ridge Mountains that was created by George W. Vanderbilt in 1895. George was a collector of many fine things, including wine, and he purchased cases of wine on his travels to enjoy at home with his guests upon returning to Biltmore Estate.

This was the underlying inspiration nearly a decade later for George’s grandson, William A.V. Cecil, to begin a winemaking program on the estate. William felt that an estate winery would not only pay homage to the legacy of his grandfather but would be a natural extension of the estate’s agricultural heritage.

“Biltmore is still family-owned, and we are passionate about our mission of preservation through self-sufficiency -- a philosophy embraced before the first stone was ever put in place,” Bill Cecil, William’s son and today Biltmore's CEO, explains. “Our wines are a great opportunity for us to offer our guests a tangible connection with Biltmore, and we’re proud of our strength of brand in this competitive field.” 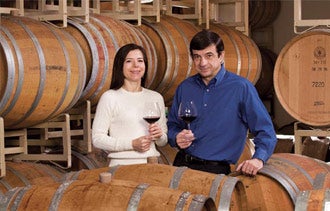 It began in 1971 as a learning experience. The first vines, French-American hybrids, were planted followed by vinifera plantings a few years later. Unsatisfied with the results, William did some research, went to Provence and hired veteran winemaker and teacher of viticulture and enology Philippe Jourdain as a consultant. Two years later, Biltmore’s first vintage, the 1979, was released to good reviews and William convinced Philippe to become a full-time winemaker for Biltmore.

Today, Biltmore offers more than 50 different wines and produces two million bottles per year. All aspects of Biltmore’s wine production rest on the shoulders of Bernard Delille, a former protégé of Philippe since 1986, and Sharon Fenchak, who came to Biltmore in 1999. They work closely with vineyard director Dennis Wynne, who received the 2008 Winegrower of Excellence award from the North Carolina Winegrower’s Association.

Beyond its excellent estate vineyard, Biltmore enjoys longstanding partnerships with several superb winegrowers across the United States. Bernard and Sharon travel to the West Coast several times a year to visit vineyards in the Napa Valley, Sonoma County and other top wine regions to taste samples, hone winemaking techniques and personally select the best fruit for their wines.

The results of their efforts have received many accolades, including three Best of Class awards at the 2011 San Francisco Chronicle International Wine Competition in the Blanc de Blancs Sparkling, Sauvignon Blanc and Century Red categories.

Although the wines enjoy national distribution, there’s nothing like visiting the winery, housed in the original dairy barn in the heart of the estate’s new Antler Hill Village. The winery offers free tastings and an inviting list of options for touring and tasting. There are plenty of engaging things to do and places to eat, all just a stroll away: an early 1900s barn, farmyard, kitchen garden and outdoor center featuring everything from carriage rides to fly fishing.

With so much to do, many visitors plan to spend the night in the gracious inn on Biltmore Estate. Offering a fitness center, library and beautiful woodland views, Biltmore Estate is truly a destination all its own.