By David Ferrell April 8, 2012
Opinions expressed by Entrepreneur contributors are their own.

After selling their successful bridal business, Wayne and Pat Dunlap wondered how quickly they should dive into their next commercial venture. They thought about a vacation. They had always yearned to explore the Greek Isles.

Wayne Dunlap thought he was being outrageous when he suggested a three-month trip. His wife responded with a bolder plan.

Dropping everything for so long seemed practically un-American, Wayne Dunlap says with a laugh. But after jiggering the figures, he saw that they could manage it -- especially if they rented out their home. So two years ago, at 58, the couple found a tenant for their four-bedroom, ocean-view home in Del Mar, Calif., and did what a sizable number of adventurous baby boomers are doing: They embarked on a midlife career break, or "gap year," to tour the world.

The Dunlaps enjoyed their globe-trotting so much that they kept going for nearly two years, not one. They visited more than 100 countries. In giddy tones, they take turns rattling off a list of their experiences: riding an elephant in Thailand (top). . . river-rafting in Argentina . . . climbing the Great Wall of China . . . sailboating on the Nile . . . scuba diving in the Red Sea . . . zip-lining through a Costa Rican rainforest.

"We were out of control," Wayne Dunlap says. 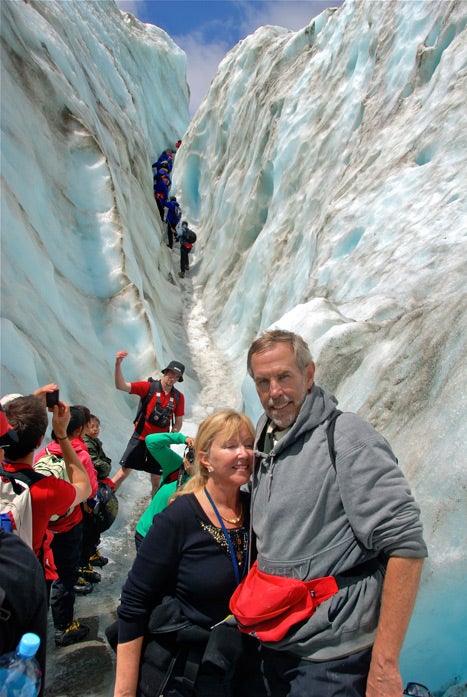 One day in New Zealand they were in crampons, hiking a massive glacier of blue ice (right). Another day they wore swimsuits, savoring wine and cheese in the churning, Jacuzzi-like waters where two rivers converged.

"It's such rugged country," Pat Dunlap says, "you feel like you're in an 'Indiana Jones' adventure when you're there."

With volumes of information now so readily available -- online and elsewhere -- travelers who decide to indulge in a gap year abroad can find everything from rules about visas and vaccinations to what to wear in Prague. Still, the decision to devote a year or more to foreign travel is enormous. Usually, it means renting out or selling a home, plus disposing of a car and furniture. Travel costs are substantial -- $20,000 to $25,000 a year per person, by one estimate, if you avoid fancy hotels. There are risks of getting sick or losing valuables.

Like many who make the plunge, Lisa Lubin was at a personal crossroads when she quit her well-paying job as a television producer for ABC in Chicago. Her interest in travel already had been piqued by David Elliot Cohen's book, One Year Off: Leaving It All Behind for a Round-the-World Journey with Our Children, which chronicled the author's adventures with his wife and three kids as they explored distant deserts, rivers and mountains without television or video games.

"That was a huge inspiration to me," says Lubin, who is now 39. "They were baby boomers. It was like, 'Wow, they did this thing!'"

Lubin's eagerness to travel grew after her cat died and she broke up with her boyfriend. She sold her two-bedroom condo near downtown Chicago. "At that point," she says, "I made a decision I was doing this," whereupon she also sold her car and furniture and planned an itinerary. She left in 2006 without a return ticket, telling friends she would be gone for a year.

"I traveled 15 months straight, literally around the world," Lubin says. Starting in Costa Rica, where she enrolled in a Spanish-immersion class, Lubin wandered throughout Central and South America, then hopped to Australia, where she took part-time work at a café to cover her living expenses. From there she flew on to Vietnam (above), took a bicycle tour from Hanoi to Saigon, and visited Cambodia, Thailand, Singapore and Berlin -- and kept going.

Traveling alone, without even a cellphone, was a difficult adjustment, Lubin admits. "It's jarring," she says. "There are hard times, lonely times, no matter how much you want to do it."

Not everyone thrives living out of a suitcase in the remote corners of the earth, says Sherry Ott, co-founder of the network Meet, Plan, Go!, who has collected feedback from successful and not-so-successful gap-year travelers. (Incidentally, Ott's company name was inspired by Eat, Pray, Love, the bestselling book turned movie about writer Elizabeth Gilbert's yearlong travels in Italy, India and Indonesia.)

"Having constant change all the time is tough," Ott says. "There's a constant state of unknown when you travel, especially if you travel to countries where you don't speak the language."

A $25,000-a-year travel budget can be blown to shreds by losing track of what's spent or staying too long in pricey Europeans nations, Ott cautions.

Lubin sought to save money by staying in hostels but felt out of place among partying young backpackers. Using Tripadvisor.com, she learned to pick out code words -- "calm," "friendly" or "family atmosphere" -- signaling that a hostel was geared toward baby boomers. Many nights, Lubin slept for free on the couches of strangers, exploiting a network of willing hosts that she found on Couchsurfing.org.

"When you're in hostels or couch-surfing, it's easy to meet people," she says. "You instantly have someone to go to dinner with. It's one of the best things I did," she says, along with bringing her laptop.

Lubin taught English in Turkey and enjoyed a free apartment in Istanbul by cat-sitting two felines named Oscar and Wilde. After a stop in London, she returned home and wrote freelance travel articles before taking off again for Europe and the Middle East. Re-settling, finally, in Chicago in 2010, she rented an apartment and cobbled together a post-gap-year career -- not one demanding job, but a mix of travel writing, freelance TV assignments, photography and video consulting. She founded her own company, LLmedia, last year.

Returning travelers often have at least one extraordinary memory that illuminates their entire gap-year experience. For Doris Gallan and her husband, Jacob Frank -- a Los Angeles-area couple who were burned out from their desk jobs and difficult freeway commutes -- the setting was a wildlife preserve in South Africa, where they spent a month bottle-feeding and caring for orphaned baby baboons.

About 300 of the primates lived at the Centre for Animal Rehabilitation & Education in the town of Phalaborwa, tended by about a dozen volunteers from all over the world, Gallan remembers. The babies required intense motherly care.

"They'd get scared and run to us and cling to us," Gallan says. "After a while, you got to know them -- their names, their personalities."

Frank bonded with a 3-month-old female named Shanti. "She would sleep on my cot with me at night," he says. Shanti wore diapers, and they snuggled under mosquito nets in a region where malaria is a threat, Frank says.

Gallan and Frank (right), who were both 58 when they began, made a full commitment to their journey, selling a four-bedroom house, their furniture, and all their possessions except for a single box of photos and love letters. They departed in 2006 with only backpacks. They were gone for five years.

Occasionally, fatigue overcame them, but going home was not an option. "Home was where the backpack was," Gallan says. To recharge, they stopped moving, holing up in comfortable spots. In Bali, their refuge was a hotel with a pool and English-speaking staff. In southern France, they enjoyed a free apartment for six weeks, courtesy of friends they had made in Antarctica. They spent a full year in China, where Gallan, who has an MBA in marketing, wrote a self-published book, The Boomers' Guide to Going Abroad.

Time away altered how they see life. "Because everything around you is new, you open up and really look at things," Frank says.

Old routines began to sound humdrum. The ever-looming question -- what to do when their travels were over -- hung over them, only to resolve itself when one of Gallan's marketing contacts announced he was developing a resort in Vietnam. Gallan signed on to handle marketing for the project.

Although they are back in the Los Angeles area, renting an apartment in Sierra Madre, the couple plans to move near Da Nang in May. Frank, who will teach English in Vietnam, is thrilled at the prospect of a new adventure.

"I can't wait," he says. "The opportunity is incredible."

This is the second installment of a SecondAct.com series on Midlife Gap Years:

Day 1: What is a Gap Year and Why Might You Need One?
Day 2: Taking a Gap Year? Go Global (today)
Day 3: The Life of a Road Tripper
Book Buzz: Tales to Inspire Your Gap Year