Sarah Max
April 12, 2012 5 min read
Opinions expressed by Entrepreneur contributors are their own. 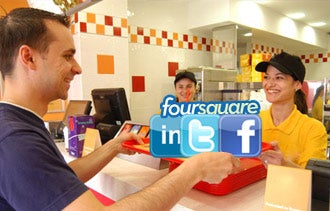 Franchise companies, initially reluctant to embrace social media, are finding ways to turn "likes" and "tweets" into dollars and cents.

Houlihan's, an 83-unit restaurant chain based in Leawood, Kansas, says its stores will see an extra 20 to 40 tables because of one last-minute mobile deal shared via Facebook, Foursquare and Twitter. "You can easily see how quickly it can pay off," says Jennifer Guvlik, vice president of marketing.

Toppers Pizza, a 40-unit franchise in Whitewater, Wis., has begun special Facebook offers on Tuesdays -- traditionally its worst day -- and seen more than 70 redemptions in a single day at some locations. And in Marlboro, N.J., Let's YO Yogurt built its Facebook page before opening its first location six months ago -- and managed to get 1,000 likes -- in an effort to appeal to tweens and teens. "We wanted to reach out to them in a way they understand," says founder Eric Casaburi, who also credits the company's sale of 30 units in part to the aggressive social-media campaign.

All of this is a distinct shift from the past. While independent businesses have long tried social media, "franchise companies are light years behind everyone else," says Nick Powills, chief brand strategist with No Limit Media Consulting, a Chicago firm focused on franchising.

The nature of franchising -- systems, consistency and control -- can run counter to the spontaneous spirit of social media. "A franchisor wants to closely manage the brand, but that takes away the point of social media, which is the personal interaction," says Rich Stark, CEO of Stark Logic, an online marketing agency in Oceanside, Calif.

That attitude is changing, however. Franchise companies are "starting to pay attention because they now realize that social media does impact sales," Powills says.

Here are tips on how a franchise company -- and its franchisees -- can become more social.

1. Start with a plan. Yes, posts and tweets should seem fun and spontaneous, but they should be part of a comprehensive social-media strategy. "It's a very free environment, but you also want to make sure the brand is well-represented when you flip the switch," says Let's YO's Casaburi, who also runs Retro Fitness, 82-unit fitness franchise in Colts Neck, N.J.

As with traditional media, you'll want to think about your target demographic and the best channels for reaching them, says Jason Hennessey, CEO of Everspark Interactive, an Atlanta digital marketing agency. Although Facebook is a no brainer for consumer interaction, also consider Twitter, Pinterest, Foursquare, Tumbler, YouTube and, for business to business, LinkedIn.

For a smaller franchise with limited staff, it can be difficult to maintain a presence on all of these. Many companies will test the various avenues before launching a full-scale campaign. Ultimately, "spend the most amount of time on the platforms that give you the most return on investment," Hennessey says.

2. Decide who has control. Should the franchise company control every aspect of social media, relinquish control to the franchisees or craft a policy that allows for both? Do you have a single Facebook page, or allow for individual franchisee pages?

The jury is still out.

Some, such as Lawn Doctor, a 360-unit franchisor in Holmdel, N.J., manage social media at the corporate level but with regular feedback from franchisees. "We have a system for franchisees to provide us with local information but on a national platform," says Scott Frith, its chief executive.

Others, like Houlihan's, encourage individual franchisees to create their own social-media campaigns -- but within the guidelines of the franchise. "You can't be a multi-unit company and have one presence on Facebook," says Houlihan's Guvlick. "You have to crack the local nut." As such, Houlihan's provides resources and lets franchisees add their own flare to their pages. At the same time, the corporate office shares marketing ideas, syndicates content and keep tabs on what's happening on franchisee pages.

The right move may depend on the particulars of your brand -- for example, the extent to which franchisees already have marketing autonomy or whether promotions are national or regional.

What do you do about franchisees who engage in unsanctioned tweets and posts? Technically a franchisee cannot use the trademark without written consent, Powills says. But rather than threaten rogue franchisees, tell them "you are going to take care of their digital footprint while they focus on local marketing," he suggests.

3. Keep it real. Of course, if you want to get the full benefits, keep your profiles "fresh and interactive," says Powills. "This is media plus social."

One way to make sure your pages stay fresh is to create a schedule of franchise contests and specials. But that doesn't mean you can turn your page on auto pilot. "If you are spitting out generic content that isn't interactive, your social-media campaign will not be successful," adds Stark.

Likewise, if followers use your Facebook page or Twitter handle to pose a question or lodge a complaint, they expect a quick response. Even worse than ignoring a negative content is removing it. "You'll only enrage people when often times they just want an apology," says Powills. By addressing the issue, "you can turn a negative experience into a glowingly positive one," adds Guvlik.