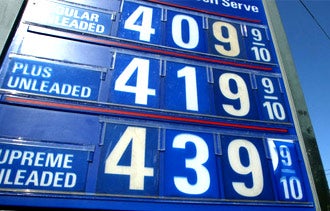 Pain at the gas pump and concern over health-care regulations are keeping small-business hiring plans on the back burner, according to a survey released today.

Even though small-business owners are feeling slightly more optimistic, according to the survey from the U.S. Chamber of Commerce, they aren’t yet ramping up hiring. In the past year, only one in five small businesses has hired, while half kept the same number of employees and about 30 percent of small businesses have lost employees.

That’s a problem for the economy because small businesses are responsible for the majority of hiring in the U.S., by comparison to their larger counterparts. And according to the government’s most recent report on the labor market, the pace of job creation slowed last month, so it’s especially important that small businesses not only start feeling better about their business, but also have the confidence to grow and expand.

Four in five small-business owners said that the taxes, regulations and legislation coming from their lawmakers in Washington made it more difficult for them to hire additional workers. More specifically, 73 percent said the health-care reform law is an “obstacle” to expanding and hiring, the report says.

The fate of the Affordable Care Act (health-care reform) hangs in limbo. The U.S. Supreme Court heard arguments on the constitutionality of the individual mandate component of the law and the possibility of severing it from the rest of the law. The decisions will be handed down in June.

Meanwhile, small-business owners also pointed to a growing concern over rising gas prices. The percentage of survey respondents that said the threat of higher gas prices was their top concern doubled to 24 percent in March from 10 percent in January.

The White House recently launched what's seen as an aggressive All-of-the-Above campaign on energy, which includes reducing U.S. dependence on foreign oil, saving families and businesses money on gas and turning the U.S. into a leader in clean energy. But small-business owners don't seem to be paying attention. Almost four in five small-business owners say the Obama administration is not doing enough to keep gas prices low, increase domestic energy production or create an energy policy that supports the economy and job growth.

The survey was conducted online for the U.S. Chamber of Commerce, a business advocacy organization, by Harris Interactive between March 17 and April 2. Of the 1,339 business executives surveyed, 536 were Chamber members and 803 were not. Small business is defined as a company with fewer than 500 employees and less than $25 million in annual revenue.

Feedback: What is your main concern when making that next hire? Leave a comment below and let us know.