By Michelle V. Rafter April 22, 2012
Opinions expressed by Entrepreneur contributors are their own. 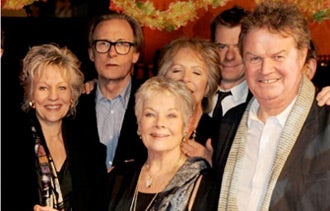 In the new film The Best Exotic Marigold Hotel, a disparate group of British expats "outsource" their retirement by moving to India. They hope to reinvent themselves by creating a new life in sumptuous surroundings that are substantially cheaper than what they'd be back home.

Because it's a movie, the circumstances of their new lives are far different from expected -- and much humor and drama ensues. The expats' adventures are chronicled in blog entries that serve as the film's narration and are kept by Evelyn, a newly widowed housewife played by Judi Dench.

"The challenge," Dench says in one scene, "is to cope with it, and not just to cope, but to thrive."

That sentiment deftly sums up the approach to the second half of life that the film espouses, one that should resonate with an entire generation of boomers facing the same question of what to make of the rest of their lives.

The Best Exotic Marigold Hotel opens in the United States on May 4.

The partners, along with entertainment company Participation Media, are offering $150,000 in grants to people over 50 who are reinventing themselves by creating organizations that improve education, health care and social services in their communities.

The Marigold Ideas for Good contest will award 30 grants of $5,000 each between now and October, with winners chosen by public vote and judges from Civic Ventures' Encore.org, which provides resources for people seeking encore careers.

Each month, one winner also will receive a vacation from Road Scholar, the educational and service-learning trip operator previously known as Elderhostel, worth up to $5,000. Additional details and an entry form are available here.

The contest takes the place of Civic Ventures' Launch Pad grant program, which last year awarded $25,000 to five socially conscious entrepreneurs over 45 chosen by public vote from among 25 finalists and 1,000 self-nominated entries.