Momentum and the Art of the Investor Pitch 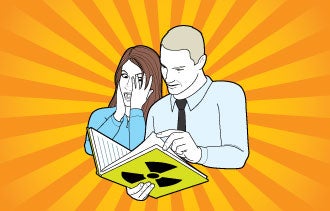 This isn't about figuring out who to pitch to or what to wear to the pitch meeting or how to follow up on the pitch. This isn't about any other part of the "sales tunnel" (mainly because I have no idea how you get to the sales tunnel or how long it takes to get through it or whether or not you can get reception in there). This is about the message you get across in 15 or 30 seconds that is the pitch.

Which is a very simple thing, really. Because there are only two kinds of pitches: those you believe in and those you don't believe in.

Here's how to pitch an idea you don't believe in:

Here's how to pitch an idea you believe in:

1. Talk. I'm a magazine editor, and much of my job involves pitching--either receiving pitches from writers or pitching ideas to my boss. The problem with most pitches I receive from writers I don't know well is that they're introduced by a list of credentials. Placing credentials at the beginning of a pitch is an attempt at hypnosis, really. It's a tactic. You want to set this kind of tactic aside. Tactics are for people who are going up against an enemy--generals, cops, parents of toddlers, people who work at an all-you-can-eat buffet.

What you want to be is: cool. "The ones who plainly state, ‘Here's the problem, here's the solution, here's why mine is better and here's why I have been working my whole life to do this'--those are the ones we want to identify," says David Lee, founder and managing partner at SV Angel, a Silicon Valley investment firm/angel fund with a focus on early-stage consumer media companies. "If they focus too much on the competition, and there's a little too much bravado, then I usually back off."

The pitch should be thought of as the first of many conversations with a partner, not a battle to be won. "You need to be authoritative but not come across as salesy. Don't be a crocodile salesman: big mouth, small ears. You need to balance listening with talking," says Mark Suster, general partner at GRP Partners, a Los Angeles-based VC firm, and founder of startup accelerator Launchpad LA. "The best pitch meetings are debates, discussions--not presentations."

How a Pitch Should Go
The best way to hone your pitch, if you think it must be honed, is to pitch to yourself. And there's really only one question to ask, which is: Are you bored? If you're bored, then the people you're pitching to will be really bored. And if you're bored, you're probably bored because you've buried the point. The core pitch should be about 15 seconds long. One cliché states that you should be able to pitch any idea over the course of a single elevator ride. This is true. Even if you're going only one floor up.

Anyway, there are two parts to the pitch:

"The idea is to show what you're about very succinctly. And then if you get the first meeting, to be able to show the value and momentum of your company," says Sizhao "Zao" Yang, an angel investor and co-founder and COO of BetterWorks, a Los Angeles-based employee perks and benefits firm. "It's all about momentum."

It really is all about momentum. The pitch itself is defined by momentum. Because the pitch is just a bridge. You're already in good shape--after all, you got the meeting. The pitch is simply the first checkpoint. Momentum.

A Few Words on Reactions
The best thing about a pitch is: Everyone in the room wants you to succeed. Which means you immediately know if it's not working. You either get nothing or you get something. (And all you need, really, is something.)

If your pitch results in an awkward stasis that makes everyone in the room feel uncomfortable, then that's it. Because the bar is so low and because everyone wants you to deliver a good pitch, if you get nothing and you have nothing else to give, then it's over.

A successful pitch requires belief, confidence, deference and brevity. In that order. If you believe in what you're saying, then the rest is easy. Because if you believe, then all you have to do
is talk. The pitch is just the beginning of a conversation--hopefully one that goes on for a long time. Years even. 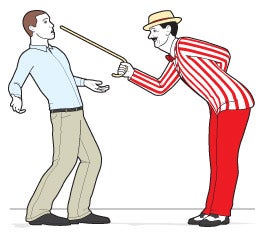 The fact that you are "amped" is not something that needs to be pointed out to the pitchee.

Related: Never use the word "pitchee."

In business, a pitch should not involve a pitching motion.

It also should not involve a batting motion.

At no point should you say, "Now bear with me here."

At no point should you ask if anyone is "picking up" what you're "putting down," unless someone in the room is literally picking up objects that you are placing on a surface.

If your pitch is veering into "spiel" territory, remind yourself that you are not a carnival barker.

If your pitch is veering into "claptrap" territory, remind yourself that you are not in a screwball comedy from the 1930s.

If your pitch is veering into "jibber jabber" territory, wrap up the pitch while backing out of the room quietly, because this particular partnership will probably not be flowering.

But leave your card anyway.

Words Worth Considering For Your Pitch