Liquortarians Hope to Get Your Vote

Erika Napoletano
Magazine Contributor
Branding Strategist, Learning from Mistakes, Helping Others Not Make the Same Ones
May 25, 2012 3 min read

I've found a party I can believe in this election year--and it all started with a friendly tip to visit Liquortarian.com. The red, white and blue splash page invites visitors to select one of three icons: donkey, elephant (both link to the appropriate party's website) or … martini glass. After yelling, "Hell, yes!" I made the sensible choice.

My vote sent me to the website of artisanal liquor company Jack from Brooklyn, where I first learned about company founder Jackie Summers.

Yes, the Liquortarian party is a marketing campaign for a new line of spirits, but that's not what interests me. Summers' faux political party and very real company are a kick-ass case study in the importance of the team.

Summers had been cooking up homemade sorrel, a Caribbean spirit, in his New York kitchen for more than 15 years. Diagnosed with a spinal tumor in 2010, Summers made peace with life, hung up his recipe and went into a surgery from which doctors said he wasn't likely to emerge. But he did. Turns out the tumor was benign, and he would see a full recovery.

Afterward, Summers left his high-stress job in the magazine industry and committed to doing "things that mattered with people I cared about." One thing that mattered to him was his famous-among-his-friends home-brew. His friend Alan Camlet, now a business partner, first downed (eight glasses of) Summers' concoction nearly eight years ago. When his hangover wore off, his only words to Summers were, "You should be selling this." 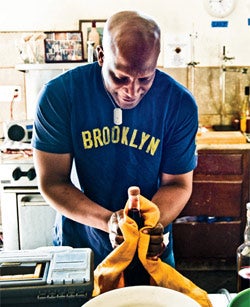 Summers knew he had a great recipe, but he didn't know how to turn it into a company. He set out to build the team that could help him go from a near-death experience to killing it, in the best possible way.

Summers, Camlet and a third partner, Tim Kealey, shipped their first spirits line in spring 2012. Unlike the people in those other parties, the Liquortarians got to where they are without talking smack about their competition, pointing fingers or other shenanigans. It all came about because these upstarts dedicated their energy toward working together to figure out how to compete against the liquor world's power brokers in the political game of launching a business.

Their underdog status meant they had to find other ways of accessing the expertise, funding and resources needed to launch an artisanal line. Putting their never-say-die attitude and belief in each other to work, they wrote a business plan, brought on investors and equipped a production facility. Restaurants are already asking about shipment dates.

"We face a host of insurmountable tasks when starting a business," Summers says. "The key to our success is focusing on one insurmountable task each day and surmounting the hell out of it. It's tenacity--that's what powers the entrepreneurial spirit."

We've all started something. We've all had something fail. But nothing has ever succeeded in the business world without a team behind it. That's what the Liquortarian platform stands for--building a team that believes support, collaboration and success are equally important goals. And that's a platform I'll vote for any day.

9 Business Ideas Under $1,000 You Can Run From Anywhere

Entrepreneur NEXT Contest: Win a Free Team to Build Your Business