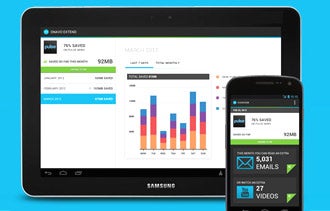 From throttling mobile customers who use too much bandwidth to jacking up the price of data plans, wireless networks have made it increasingly difficult--and expensive--for small-business owners to take full advantage of the mobile revolution.

One solution: compression services from Onavo, a 2-year-old data management company based in Israel. Onavo's free apps, available for iPhone and Android, allow users to gorge on image- and video-rich websites; stream music and video feeds; and download massive files by shrinking data streams to handheld devices by as much as 80 percent.

The technology is straightforward: Customers load the app and set the compression rates as desired (international travelers would want maximum compression to reduce pricey roaming charges). As soon as a user clicks on a web page or piece of content, Onavo's server fetches it, compresses it and sends the thinned-down version to the smartphone. And because there's less data coming through the network, mobile browser and download speeds improve, according to Onavo CEO Guy Rosen, a former analyst and consultant in the cloud-computing industry.

For Embrase, a Montreal-based consulting firm, Onavo has made staying in touch with employees and clients around the world more affordable. "Without it, we'd probably end up restricting employees from using data abroad at all, which would be a problem," says Embrase president Philippe Telio. "When people are offline, they can't stay in constant contact with the office or clients."