Harvard students Yifan Zhang and Geoff Oberhofer were conducting research on how financial incentives can influence behavior when they realized their work had applications outside the classroom. Soon, they turned their behavioral economics research into a real-world business plan.

Zhang and Oberhofer created GymPact, a free iPhone app that uses financial incentives to motivate gym-goers and penalize couch potatoes. The concept works like an old-fashioned swear jar: Users promise to exercise a certain number of times each week and are charged for failing to meet their goals. At a minimum, they must commit to one 30-minute workout per week and agree to pay a $5 penalty for skipping it, although they can up the ante as much as they like. At the end of each week, GymPact bills (via credit card) those who fail to meet their goals; the money collected is distributed to users who kept their commitments.

Unlike other incentive-based fitness apps that operate on the loyalty system, GymPact employs GPS tracking to keep everyone honest. Users receive credit for checking in at any gym or sports facility, including tennis courts and swimming pools. Possible plans include incorporating facility-free activities like running. 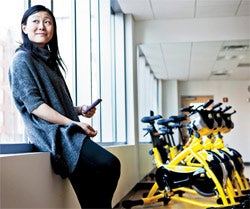 Zhang, CEO, and Oberhofer, COO, now Harvard graduates, spent a year developing GymPact, which launched Jan. 1. "We knew from the research we did in class that offering rewards wasn't enough to keep people motivated," Zhang explains. "There had to be something on the line that was a bigger incentive to stick with a goal."

Richard Komaiko, co-founder of AttorneyFee, signed up with GymPact during initial testing, hoping it would keep him motivated to hit the treadmill. During the first six months, he lost 20 pounds. Looking back, he admits that losing $10 for skipping a workout was less of a motivator than avoiding the scolding e-mails he received from GymPact when he failed to meet his goal.

"I hated those e-mails that said, ‘You didn't deliver on your promise, and we've billed your credit card,'" he recalls.

The rewards were much more pleasant. Although payouts depend on the number of users who skipped workouts in a given week and their preset penalties, Komaiko says he earned about $10 per week--"enough to buy a few lattes."

The company earns revenue through the user-generated fees: Each time someone is paid for meeting an exercise goal, GymPact takes a 50-cent flat fee plus 10 percent of the reward.

Zhang and Oberhofer set a goal of signing up 1,000 users in the first month; within two weeks 20,000 had joined. In response to the onslaught, they rushed to hire part-time staffers to deal with questions and complaints and installed customer-service management software to improve the experience--moves the pair didn't expect to be making until GymPact was at least a year old.

The upside: The business exceeded its revenue goals. "We thought it would take six months before we started covering our costs," Zhang says. "We hit that goal before the end of the first month."

Launching the app required $50,000 in startup costs. Zhang and Oberhofer borrowed $10,000 from their families and participated in Start-Up Chile, a six-month business incubator that provided the remainder of the funding.

The GymPact team plans to expand the app to additional platforms and hopes to add prize sponsors and corporate partners to offer more motivation to committed exercisers. Ad sales are another possible revenue stream.

In the meantime, Zhang says she has increased her own gym attendance, and her passion for fitness has her thinking about how to best serve GymPact members. Says Zhang, "We want to become a trusted brand and create the best community for our users."