These Entrepreneurs Fought the Law. . . And Won.

When Paul Hletko's grandfather died in 2008, the Evanston, Ill., patent attorney wanted to do something to honor his legacy.

His grandfather, a Jew from Czechoslovakia, had operated a brewery there until it was taken away during World War II; Hletko, who had been a home brewer for two decades, decided to open a craft distillery in his memory.

"After doing a lot of research, I decided that the right place to do it was right where I live," he says. The problem was, Evanston was a notoriously dry town. In the late 1800s, the Chicago suburb was the home of Frances Elizabeth Willard, head of the Woman's Christian Temperance Union. Alcohol wasn't served in the town's restaurants until the 1970s, and the first liquor store didn't appear until the 1980s. But Hletko wanted to be close enough to home to walk his three kids to school, so he wasn't going to let a little thing like a century-long bias against alcohol get in the way of launching FEW Spirits (named for Willard). 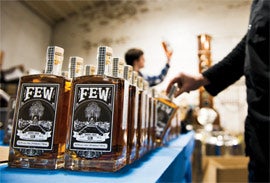 Legal obstacles can be as frightening to lawyers as they are to would-be business owners, says Jonathan Askin, a Brooklyn Law School professor and founder of the Brooklyn Law Incubator and Policy Clinic (BLIP), which offers pro bono services to help startups navigate legislative, regulatory and judicial obstacles. "Too many lawyers stop wonderful ideas dead in their tracks because they're worried about dotting every i and crossing every t," he says. "If a law doesn't enable innovation, lawyers should work to reform the law."

That's exactly what Hletko set out to do, using his own training as an attorney to his advantage--despite knowing he'd be fighting an uphill battle. "The legal landscape was difficult," he acknowledges. "I not only had to get the liquor laws changed, I also had to get zoning laws changed. That impacted the health department, and then everyone got involved."

He started with the liquor laws, getting Evanston to put a new class of license for microdistillers on the books. Next came hearings in front of the zoning board to get a generic "special use" provision to allow a craft distillery to operate by special permission in specified zoning classes. Then he had to secure that zoning class for his planned location. Finally, he got the health department to establish a law permitting distillation as well as food (in the case of FEW Spirits, pretzels) without a commercial kitchen--something previously required of any Evanston establishment serving alcohol. The whole process took about a year.

FEW Spirits started production in June 2011, and business took off quickly. FEW's gin, rye and whiskey are sold in trendy bars and restaurants in Chicago, Seattle and Vancouver, British Columbia. Last year the company's white whiskey won a Double Gold medal (the highest award) at the New York World Wine and Spirits Competition and a gold award from the Beverage Tasting Institute. 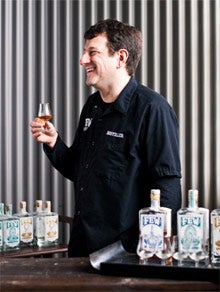 Cheers to him: Paul Hletko didn't let legal obstacles get in the way of starting FEW Spirits.

"I lost track of my city hearings after 15 of them, but despite the volume I never once took a ‘no' vote, and all of the law changes I sought were unanimously approved," Hletko says, noting that the backing of Evanston's economic development office was a huge help. "My network played a big role, too. I'm the vice president of the PTA at my kids' school. I coach soccer and T-ball. I'm on the board of directors for the chamber of commerce. People around town know me and what I'm about, which is handy when looking at a business like mine."

It helped, too, that as an attorney, Hletko didn't have to worry about racking up legal fees. "All of that would have easily added up to 80 to 100 billable hours," he says, estimating the equivalent cost at more than $20,000.

Legal Eagles
Jonathan Askin's law students get school credit for their work in the Brooklyn Law Incubator and Policy Clinic. It functions like a law firm, counseling and representing internet, media and tech entrepreneurs on issues of business and policy advocacy. For more information, contact blip@brooklaw.edu.

He speaks from experience. In 2003, while working on Free World Dialup, an internet-based voice communications service, his company filed a petition with the FCC asking that the product not be regulated as a telecom. When the FCC released its order, it paved the way for a competitor, Skype, to launch an unregulated service, stealing Free World Dialup's thunder and business. "What I took away from that was that sometimes you need to let the law catch up with you," Askin says.

This is particularly true when it comes to digital businesses, which often have to deal with laws written for an analog, pre-internet world. One client BLIP helped in this arena was StationStops, a scheduling app created in 2008 for Metro-North trains that run in and out of New York's Grand Central Terminal. The issue boiled down to whether the Metropolitan Transportation Authority (MTA) owned its scheduling information as copyrighted intellectual property, and whether an app developer could format and sell this information to make a profit.

"Goliaths have plenty of legal resources to measure their risk for them. Davids don't, and the more anecdotes future entrepreneurs have to discover and draw on, the greater the likelihood more will be willing to aggressively measure and manage their risk, rather than simply avoiding it out of fear." --Chris Schoenfeld, StationStops

"Just a few years ago, this was an IP battle to get access to the MTA info," Askin says. "Now it's routine to get online datasets, but this was all new then."

Chris Schoenfeld, the software developer who created StationStops, was encouraged by other developers' IP battles. "Goliaths have plenty of legal resources to measure their risk for them. Davids don't, and the more anecdotes future entrepreneurs have to discover and draw on, the greater the likelihood more will be willing to aggressively measure and manage their risk, rather than simply avoiding it out of fear," he says.

Khan is the founder of s.h.a.p.e.s. Brow Bar, a Cerritos, Calif.-based chain of 60 salons and kiosks that specialize in a hair removal process known as threading. When she sought in 2007 to add locations in Texas, the state's health department threatened to shut s.h.a.p.e.s. down because employees were not licensed cosmetologists. This had not been a problem in Illinois, where she started her business and where threading is exempt from laws that apply to traditional salon services.

"The problem was that cosmetology schools don't teach threading," she says. "It doesn't fall under traditional cosmetology guidelines; it's an ancient practice. As long as it's done in a sanitary environment, there's no need for a license."

In 2010, with the help of the Texas branch of the Institute for Justice libertarian law firm, Khan was able to get an injunction against the health department and its inspectors that prevents them from contacting the brow bars until the case is resolved. It's still in the courts, but Khan is optimistic about the outcome.

Luckert faced a similar issue last year when she sought to expand her Beverly Hills, Calif., salon, Angel Hair Braids, to Las Vegas. "The licensing requirements for braiders were much different in Nevada. [There], braiders were required to attend cosmetology school for 1,200 hours, whereas in California, braiders had become exempt from these laws years ago," Luckert says. "I called multiple cosmetology schools in Nevada. Nearly all of them said that they didn't teach braiding."

Persistent research paid off with a meeting with Nevada's director of cosmetology and a lobbyist who worked with Luckert to get the law changed. "There were many hearings, lots of traveling and, more than anything, tons of stress accompanied with these efforts," Luckert says. In June 2011, the law passed allowing braiders to attend 250 hours of schooling, with a focus on infection control. Because she received pro bono help and did a great deal of research herself, Luckert's expenses of about $2,600 were related mostly to travel and fees.

"More than anything, it was the time and stress ... that really proved to be the most challenging," she says. "There was so much opposition from folks and organizations that I never thought would be opponents of any sort. It was a very upsetting process at times, but ultimately extremely rewarding."

Khan's experience has taken a huge financial and emotional toll; she estimates she has spent $100,000 so far trying to get the law regarding threading changed. "All of my profits [for one year] went to legal fees, flying in and out of Texas and costs related to this case. Scared employees were calling me to quit in the middle of the night, and I was wrapped into long-term leases at shopping malls that I couldn't get out of," she says. "It felt like I was living a nightmare."

While an element of panic is the price of running a startup, some anxiety can be avoided by talking to a legal expert before you get too far into the process, says Jennifer Berrent, a partner at the New York office of WilmerHale, a law firm with litigation, regulation, intellectual property and other practices.

"Even if laws are antiquated, there's someone who has seen it, and if you can find the right kind of experts, they can demystify it," Berrent says. "A lot of people starting businesses don't like to think about legal issues, but seeking out an additional level of expertise early in the process can help you adjust your business model or help you see a different way to approach what you're up against.

"Every day I see something new in the context of what I already know. Your company is your baby; you want to get legal advice from someone who understands the laws related to it."

5 Things to Consider as You Scale a D2C Business