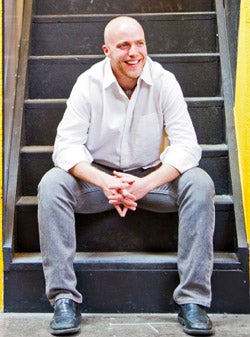 His excuse for being tardy--"I was talking Virgin Galactic into giving us some free parabolic weightless spaceflights"--is raucously approved by his colleagues: head of business development and lead engineer Brent Bushnell, lead engineer and Caltech-trained physicist Dan Busby, lead engineer and roboticist Eric Gradman and creative director and industrial designer Hector Alvarez. The purpose of these spaceflights, and the autonomous drone recently purchased by Gradman, remains a mystery (though the phrase "rubber chickens" is said in passing), but the end result is guaranteed to be a spectacle.

Indeed, spectacles are what companies are seeking when they approach Syyn Labs, a superstar art collective turned creative production company founded in 2008, comprising seven full-time staff members and up to 50 part-timers who can offer expertise on anything from circus arts to molecular chemistry.

You might be familiar with Syyn Labs' work for Google and Disney XD. More likely, you've seen the music video for "This Too Shall Pass" by indie rock group OK Go, featuring a single, nearly four-minute take of a perfectly timed, wildly elaborate Rube Goldberg machine; the clip has garnered more than 35 million views on YouTube. Then there are last year's DieHard battery commercials, culminating in a video made possible by Busby's "math on the back of an envelope," in which the team wired together 24 white and black cars to resemble piano keys and tuned the horns so pop icon Gary Numan could play his hit "Cars" on cars--all powered off a single battery. 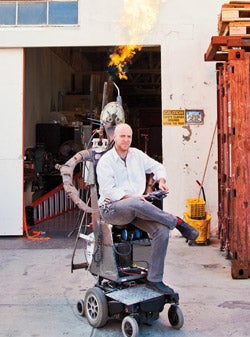 Syyn Labs started as a bootstrapped passion project; most members were between jobs or working full-time elsewhere. But since the OK Go video went viral in 2010, there's been a steady pipeline of work, ranging from $20,000 projects covered by community arts grants to multimillion-dollar commissions for Super Bowl commercials.

"Advertising is craving these kinds of physical experiences," Bushnell says, noting that Syyn generates additional revenue through TV and entertainment events. "Syyners" keep their creative juices flowing with personal side projects--consulting gigs, workshops and inventions, including a desktop "weather box" you can touch to feel the outside temperature. The company recently wrapped a project for GameDesk, an alternative-education organization whose board of directors includes Bill Nye and LucasArts president Paul Meegan.

J. Christopher Burch, founder of several global retail brands and head of New York-based J. Christopher Capital, which has invested in tech gadget companies like Jawbone and Powermat, says when it comes to technology, he looks for opportunities and ideas that have the ability to change the way consumers go about their daily routines. "I believe if you are creative about product and environment, the customer will follow," he says.

There's certainly no shortage of creativity at Syyn Labs, where the ethos is about making art, first and foremost, using technology as the medium to sketch and build content that "delights" consumers. "The business world took notice of us because we could execute their wildest ideas," Alvarez says. "If they want to throw a car off a building, they come to us. That has allowed us to create a profitable business."

Kik Interactive: This app developer created Kik Messenger for fast, cross-platform and group texting, as well as the Clik app, which turns smartphones into remote controls for any screen that has an internet browser.

PrintEco: A plug-in that automatically optimizes documents for printing in order to save paper.

Yottaa: Its Site Speed Optimizer doubles the speed of any website's load time without additional coding or software.

Nimble: Pulls together Facebook, LinkedIn, Google+, Twitter, e-mail, contacts and calendars onto one screen with a brilliantly simple CRM.