For hard-core runners, carrying money during a workout can get messy. Many running shorts lack pockets, and those that have them haven't quite figured out a way to keep the sweat out (we know--gross).

Philadelphia-based Vitaband solves the problem once and for all: The rubber wristband includes a contactless Visa Prepaid debit chip. By setting up and preloading a Bancorp debit account connected to the Vitaband's chip, wearers can race into any 7-Eleven (or thousands of other merchants) to grab a Gatorade or PowerBar and pay for it by waving their wrists near the wireless payment reader. No need to fumble with sweat-soaked cash or deal with uncomfortable credit cards stuffed into running shorts. 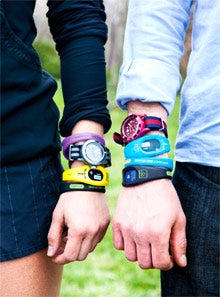 The concept has other benefits; in addition to the debit card, Vitaband bracelets connect to a data file with the wearer's name and a personalized medical history. In the event of an accident, EMTs can call the toll-free number on the band to download the wearer's information.

The idea came to Jason Brown after a near miss with a car while jogging. "Out of something potentially disastrous came something practical," he says.

Brown and his childhood buddy David Waxman founded Vitaband in 2007. They made the decision to not manufacture the bands themselves, but instead to license the health record and debit chip platform to manufacturers to place into all sorts of wearable products, such as watches and clothing.

"We realized that we didn't want to be in the consumer products business," Waxman says. "That wasn't our strength to begin with."

For Brown and Waxman, it has been a lean five years to reach this point. Initial prototyping took months, and it took even longer to convince manufacturers such as Nathan Performance Gear that the technology was worth licensing. During this process the two buddies have put up about $50,000 of their own money, hit up friends and family for funds and, most recently, turned to investors for additional help. The duo has amassed roughly $750,000, most of which goes into development and marketing.

Looking forward, Waxman says the company's next challenge will be licensing the platform to manufacturers who serve other markets, including children and senior citizens, as well as health insurance companies. "It's such an easy way to add an extra layer of service and safety to nearly anything," he says. "We haven't come close to tapping its full potential."