5 Resolutions for Freelancers in the Coming Tax Year 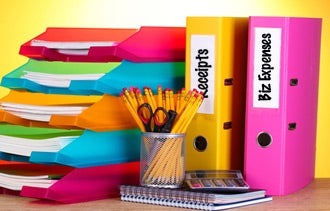 Every year around tax time, we enjoy wishing freelancers a happy new year. That's because one of the best times to get serious about personal finance is now, when you've finished your taxes and have resolved to organize your financial life better for next year.

Most of the time, we're addressing young freelancers who are struggling to make ends meet and making mistakes experienced freelancers have long ditched. But every year we meet experienced freelancers who are doing things the hard way. For example, there's the social media guru -- a man who recently billed one client six figures -- who told us that his filing system consisted of stuffing receipts and unopened bank statements into plastic bags scattered around his office. It was April 1, and he was determined to organize the contents of all eight bags in a day so he could meet with his accountant.

If you're like him, April 16 is the day you get away from all that, and it starts with good financial resolutions like these:

Organize better. The social media guru could have done better if he'd done only three things: bought himself an accordion file, a file cabinet, some financial software -- and used them all. Once you commit to it, it's as easy as hitting a button (to download financial data from your bank) or stashing receipts in folders labeled with all of your key spending categories. We like Quicken. We like Mint. Pick your poison and stick to it. If you go the Dickens route and keep an analog record of your purchases, that's fine. Just understand that software allows you to easily generate reports and analyze your spending.

Switch to a percentage model for savings. Self-employed people face a problem nine-to-fivers don't: They don't know how much they're going to make each year, and that wreaks havoc with their saving goals. Arbitrarily saving $100 every two weeks for taxes and savings does not work unless you know the money will be there. To instill some order, mine your 1040s before you mail them and calculate what you paid to the feds, state, city and your accountant -- all as a percentage of your gross income. Going forward, deduct that percentage from every single check as it comes in the door and squirrel it away in a separate bank account with no ATM access. Adjust the savings percentage as necessary in 2012.

Pay your estimated taxes. We encounter new, young freelancers who don't pay their estimated taxes during the year. (Chuckle if you want, but none of us gets a memo to that effect after being laid off or fired and deciding to hang out a shingle.) If you save a percentage of your earnings with every check, you'll have no problem coughing up a portion of your stash four times a year (on April 17, 2012; June 15, 2012; September 17, 2012; and January 15, 2013), and your passage through tax season will be a breeze. Some freelancers say they'd rather "preserve their cash flow" and delay paying those taxes. This can work in certain circumstances, but more often it's a rationalization to not spend the money right away. Just know you're on the hook for any underpayment penalties come April 2013.

Hire experts who are not you. Most professionals understand it's not worth the headache to do certain tasks that require specialized expertise. Yet some freelancers are tempted to do their own taxes, though they can barely calculate a lunch tip. Ask other self-employed friends to recommend a tax preparer who knows self-employed taxes. The ideal preparer will help calculate your estimated taxes each quarter, give you some pointers on deductions you haven't considered and advise you on upcoming changes to tax law. When you get comfortable with one expert in your life, save your money for two more: a personal financial planner to help you plan for goals, and a lawyer to draw up all necessary documents, such as wills, trusts and health care directives.

Project and direct your income. Instead of waiting to see what you earn this year, actively set goals to achieve a certain income. Figure out what you want to make annually and calculate your desired monthly billing. With this info in hand, you can figure out how much business you need to pitch. In most freelance work, the more you pitch, the more you earn, and a certain number of noes ultimately result in a yes. This worksheet provided by Deidre Rienzo on the Marketing Mix Blog can help you figure out exactly how many pitches you need to be doing each week.

A final note. The worst habit self-employed people can develop is waiting for the big score. "When the big project, the big deal, the big account comes in," goes the thinking, "then I'll save for retirement or taxes, or pay off that credit card or student loan."

Big-score thinking perceives money as the savior, but it's not. Good money habits are. Stick to your resolutions and see.

Managing Investments As A Charity Or Nonprofit

These Are The Ten Richest Women In The World In 2021