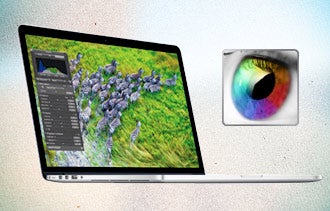 Whether you're an Apple product user for life or simply in the market for a new laptop, Apple's new MacBook Pro has some attractive new features for business users. The tech giant unveiled the new iteration of its popular laptop today at its Worldwide Developers Conference in San Francisco.

First among the computer's major new features is Apple's super-high resolution "Retina" display, which the company says has more than 5 million pixels -- 3 million more than an HD television. Spread out over the laptop's 15-inch display, that computes to about 220 pixels-per-inch. The screen also has 75 percent less reflection and almost 30 percent higher contrast than the previous generation.

Translation: The new MacBook Pro has an incredibly sharp display that rivals Apple's new iPad Retina screen. So if you haven't made the jump to an iPad yet, the new MacBook Pro's display can be a useful new upgrade for entrepreneurs who make business presentations on-the-go.

The laptop starts shipping today and starts at $2,200. That's compared to the non-Retina 15-inch disply MacBook Pro which retails for $1,800 and the 13-inch MacBook Air for $1,200. Apple has upgraded both current generations of those models with faster processors and new graphics. But if the high resolution display is what you're after, the $2,200 price tag might be worth it.

What's also immediately noticeable about the 15-inch MacBook Pro is its new form: It measures a slim 0.71 inches wide and weighs 4.46 pounds. But the laptop's smaller frame doesn't hinder its processing power. The $2,200 model comes equipped with Intel Core i7 quad-core processors with "turbo boost" speeds up to 3.7 GHz, 8 GB of memory and 256 GB of flash storage. Another 15-inch model with up to 16 GB of memory and flash storage up to 768 GB costs $2,800.

The MacBook Pro comes with Apple's Lion operating system but purchasers will be eligible for a free copy of OS X Mountain Lion when it becomes available, Apple says.

Other features include an HD camera, a full-size backlit keyboard, HDMI and dual microphones. The battery is expected to last about seven hours.

Will you purchase a new MacBook Pro for business use? If so, let us know why in the comments section below.