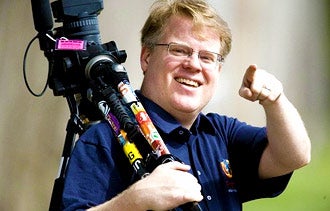 Robert Scoble's finger is on the pulse of technology. He not only blogs about tech and publicly speaks about it, he follows almost 33,000 people and organizations on Twitter. He's passionate about social media and emerging technologies -- and the entrepreneurs behind them -- to the point of obsession.

After serving as a technical evangelist at Microsoft in the early 2000s and later as a vice president of a video podcasting network called PodTech, the popular tech blogger works as a managing director of Rackspace, a cloud-based website hosting company in San Antonio, Texas. We sat down with Scoble to chat about tech startups and the trends that are guiding the industry.

If you talk to venture capitalists, they look for a few things. One, does the entrepreneur have a team behind him or her that can deliver on the business plan? Adoption is another big thing. Is anyone using the product?

For me, a tech startup needs to be in an interesting area, what I call "battlefields." If you show me a Windows XP app, I don't care if it's the coolest thing you ever thought of. If you show me the app on an iPad, I'll probably be more interested. The iPad is the future.

Entrepreneur: What's the future of social media and tech?
Scoble: I think we're at the beginning of a shift, moving from the conversation age to a more contextual age. Google Glasses, which we're starting to see prototypes of, informs us what this contextual age means. If I'm walking down the street, they should be able to show me information that I need to know while walking. Not a movie, because I need to walk and navigate. If I start driving a car . . . they should show information about accidents or speed limits. It's all about context.

Entrepreneur: What inspires you professionally?
Scoble: I love meeting people who see the world in a new way. Sitting down with Tony Hsieh at Zappos and understanding what customer service is all about. Or with Sergey Brin to find out that he's working on these glasses and self-driving cars, getting a glimpse at how the world might shift because of what he's doing at Google.

Entrepreneur: How do you stay on top of your game?
Scoble: I'm a social media fanatic. At my desk, I have three big screens in front of me on which I watch Twitter, Facebook, Google+, Gmail, Quora, Techmeme, Salesforce Chatter so I know what my co-workers are talking about -- you name it. I sit there and it's like the world comes to me.