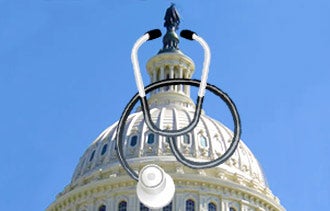 The National Federation of Independent Business runs with the tagline "The Voice of Small Business," but a group of Congressional leaders are challenging the group's interests. This, while the NFIB spearheads the fight to overturn President Obama's health care reform act, in a case awaiting a Supreme Court ruling.

In a statement, the lawmakers called into question whether the NFIB "actually represents major corporations and conservative political interests." In particular, they're questioning a $3.7 million donation from a group Crossroads GPS whose parent organization cites Republican political strategist Karl Rove as its adviser.

The letter requested details on how that money was spent, and called on the NFIB to disclose all contributions it received over the past three years. The lawmakers also want a list of NFIB members, membership fees and details on any donations those members have made to the organization.

Related: Is the Health Care Tax Credit a Dud?

"The Affordable Care Act, or 'ObamaCare,' is a major accomplishment that is already benefiting millions of Americans. The fact that the NFIB has asked the highest court in the land to review the law -- and possibly overturn it -- means relevant information about participants should be disclosed," Rep. Ellison said in a statement.

The NFIB does not plan to disclose its donor list, amounts of donations or its member list, according to Jean Card, a spokesperson for the NFIB.

"We are representing our membership well and per their wishes," Card says. "The underlying charge of this letter is unfounded."

Card says that the $3.7 million donation from Crossroads GPS was "absolutely not" used to fund the health care lawsuit. The money was used to pay for advertisements promoting issues important to NFIB members in the 2010 Congressional election cycle, she says.

Related: What Small Businesses Care About This Election Year

The implication that the NFIB is not independent and is championing conservative political issues is not true, says Card.

The health care reform act, officially called the Patient Protection and Affordable Care Act was signed into law in 2010, but most provisions don't go into effect until 2014. It will require businesses with more than 50 employees, working 30 hours a week on average, provide health-care coverage or pay an annual fine of up to $3,000 per employee (called the employer mandate). The individual mandate will require nearly all individuals to pay for their own health coverage or pay a fee. The NFIB calls the reform "job-killing."

Do you think the NFIB should disclose its list of members and donations? Why or why not? Share your approach and respond to other readers in the comments below.

Financial Wellness Is Now a Requirement, Not a Perk

Why Seller Financing Could Save Your Acquisition Deal From Disaster

Your Guide to 2020 Year-End Tax Planning