Network Optix Takes Video Surveillance to the Next level

If Network Optix has its way, we're going to see more security cameras--and more employees acting poorly, like the viral YouTube video of a soon-to-be-unemployed FedEx worker delivering a computer monitor by hucking it over a fence. That's because in March, the Burbank, Calif.-based firm unveiled an enterprise video-surveillance platform that promises to leave the industry--and current streaming HD video capabilities--in the dust.

"The product does things none of the others can do," co-founder and CEO Nathan Wheeler declares. This includes streaming an unlimited number of high-definition videos simultaneously, with almost no delay; image recognition and tracking across different camera feeds; a search function that jumps to periods where movement is detected in a particular highlighted area; and real-time zoom and focus functions that can make, say, a fuzzy license-plate number legible.

Network Optix got its start in 2009, when Wheeler, a top salesman in the camera surveillance industry, was closing multimillion-dollar deals with Google and T-Mobile. It bugged him that he could watch CNN in high definition anywhere, such as his dentist's office, yet the majority of surveillance video was still of poor quality--"one-tenth the resolution it should be to monitor and capture perpetrators," he says. The problem, he realized, was bandwidth. "HD video is the biggest hog of bandwidth out there--Netflix uses up 17 percent of it alone," Wheeler explains. 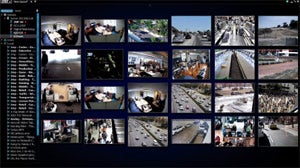 He turned to talented codec engineer Sergey Bystrov and asked him to design "a unicorn that could fly," as he describes his wild idea to reinvent the industry. By 2011, they'd both quit their full-time jobs to work on bringing the first H.264 line--a compression format that reduces bandwidth used by HD systems--to video surveillance.

Bystrov's platform integrates with cloud-based systems and transfers data only at the rate it's needed, instead of shoveling it through the pipeline all at once. This frees up overall bandwidth to make the entire network more efficient. Even better, the less than 28 MB program takes just 20 seconds to load and can be operated by even the biggest technophobes.