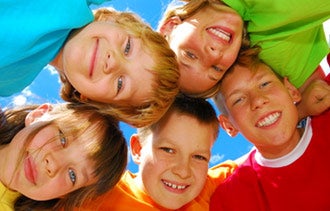 Little tykes are big business – a reality that hasn't escaped the franchising world.

Up one aisle and down the next at the recent International Franchise Expo in New York, there was no shortage of franchises aimed at young children… and parents who may be willing to pay handsomely for their services.

One relative newcomer is Cool de Sac – its slogan is "Eat Well. Play Smart.” – a full-service restaurant with soaring open rooms where kids can munch on healthy meals and hang out at playstations while parents enjoy upscale grownup fare like seared tuna and wine.

"You're seated in a restaurant and you can have sight of your kids the whole time,” says Alejandro Abascal, managing director of the Miami company, which has two corporate locations in Florida.

Cool de Sac is looking to open 30 stores in the U.S. and 50 internationally within five years, but the physical requirement – each restaurant is 8,500 to 10,000 square feet – raises the price of entry. Franchisees need to invest some $850,000 to $2 million initially, Abascal says.

"It's a great market for people out there who want to get P.E. back in the schools," says Terri Braun, the company's founder and president. Many schools, she added, are "outsourcing P.E.”

Kidokinetics has locations in Texas, North Carolina and Florida. Franchisees invest between $42,900 and $57,000. "I don't want to grow too quickly," says Braun, adding that she'd rather have 10 happy franchisees than 100 who may be dissatisfied.

The Sunrise, Fla., company, which teaches infants through adults, recently was poised to sign its fourth franchisee. Franchisees, who use hotel or school pools, can get started with less than a $50,000 investment, says Goldberg, although costs potentially could reach nearly $90,000.

There are great young swim teachers, and "they never think they can make a future” in swimming, says Goldberg, who aims to show them otherwise.