A Former Broker Taps Into His Passion for Vintage Guitars

"I have a passion for trading, for buying low and selling high. And that's one of the more critical assets in this business," David Kalt says of Chicago Music Exchange (CME), his marketplace for new and used musical instruments, as well as repairs and restoration. 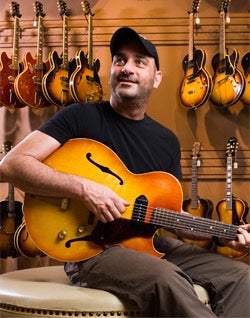 Music has always been a big part of Kalt's life. While working as CEO of his former company, online brokerage OptionsXpress, he built a recording studio in his home and collected guitars. With the acquisition of CME on Chicago's North Side, he has combined his passion with his online expertise.

Kalt bought the 19-year-old, 10,000-square-foot showroom from owner Scott Silver in June 2010 for $7.5 million. Since then, he has added a drum shop and an in-house video recording studio, and expanded CME's e-commerce capabilities. He expects to expand to 25,000 square feet next year. Further plans call for launching an eBay-like auction site for used instruments.

"People who get into [selling] instruments tend to run businesses with spiral notebooks," Kalt says. "I was able to leverage technology here."

Previously, there was little price transparency and few online options in the vintage-instrument market. CME's e-commerce tool makes it easier for collectors to find, price and sell those instruments; in fact, the company claims to be the world's largest dealer of vintage guitars. 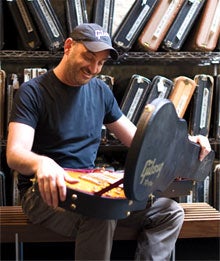 The store also has an expanded stock of new guitars, as well as other merchandise such as drums and amps. Prices range from $500 for a new entry-level instrument to $250,000 for a rare vintage guitar. Customers run the gamut from recreational players to alt-country hipsters The Civil Wars to megastars such as Adele, Melissa Etheridge and Steve Miller.

Annual revenue is $8 million; Kalt says he would like to hit $10 million to $12 million without adding stores or increasing his staff. "One of my goals is figuring out the resources of our 25 employees," he says. Indeed, a major part of Kalt's success has been his commitment to employee satisfaction. "I want them to look at this as a long-term career," he says. "That's why we're adding the video and building a recording studio. We want them to be able to record here." 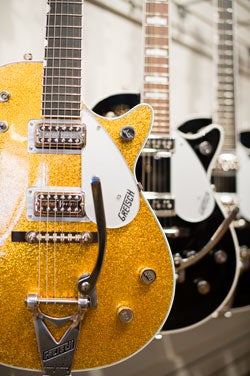 That's a big difference from big-box music stores that function as interim employment for wannabe professional musicians. "It has taken some soul-searching to figure out how to manage people who are passionate about what they do," Kalt says. "The carrot of more money in front of them does not matter."

Live MTV Unplugged-style shows from bands like Camper Van Beethoven have increased CME's visibility with the public, as have accolades from celebrities. After Cheap Trick guitarist Rick Nielsen damaged his signature 1983 Hamer five-neck checkerboard guitar last year in a stage collapse, he brought it to CME.

"I kind of panicked," Nielsen recalls of seeing the guitar's warped necks. "But David is probably overqualified for what he does. I know places all over the world, but [CME] has the expertise. Since David took over, their presence is way up."

So, does the five-neck play as well as before? "Yeah, it is better than ever," Nielsen says. "Well, that thing is impossible to play anyway."