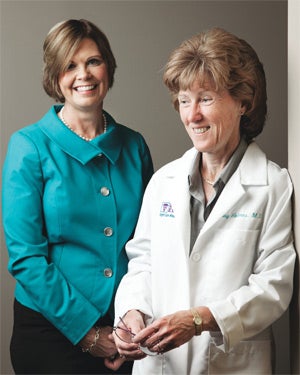 Over a long career as an obstetrician and gynecologist, Dr. Kay Holmes brought a good percentage of the population of Jacksonville, Fla., into the world. But in 2009, Holmes decided she wanted to help the people of her city in other ways. She partnered with Ellen Sullivan, a nurse with more than 20 years of experience as a healthcare executive, and the following year, the two opened the first Doctors Express urgent-care franchise in Florida.

"It's a great way to offer healthcare to a lot of people in a cost-friendly manner," Holmes says. "They get the attention they need on their time, rather than coming into the office at times when they're busy. So it's a little more flexible for the patient. We set the tone of how we want medicine to be delivered, and we want the patients' time to be respected."

Healthcare may not be the first industry that comes to mind for franchising. But to Holmes, the Doctors Express concept made perfect sense. The idea is to offer non-emergency treatment on a walk-in basis, eliminating the need for an appointment with a primary-care physician or lengthy waits in an emergency room.

At Doctors Express, patients wait about 15 to 20 minutes and are guaranteed to see an M.D. Most important, the clinics operate during the evenings and on weekends, when most medical practices are closed. The visits are generally cheaper than trips to the ER for both the insured and the uninsured. "Our prices are less than the emergency room," Holmes says. "That's why the vast majority of insurance companies cover urgent-care centers like us."

Holmes hopes to see 1,000 Doctors Express clinics open across the U.S., and she is on the ground floor of that expansion as an area developer for 37 counties in northern Florida and southern Georgia.

We sat down with Holmes and Sullivan to learn more about their vision for medical care.

Why would physicians want to work for a franchise?
Sullivan: Our physicians come from many places. We have emergency-room physicians, family-practice doctors and many seasoned urgent-care physicians. We have military physicians, and we like providing jobs for them. Many of them have been in practice themselves, and this is seen as a model that appeals to them. They don't have to worry about being on call, because they have simple, straight, 12-hour shifts.

Holmes: I think they would say they're happier working here. Dealing with insurance, payroll, paying bills and administrative tasks are never the fun part. They come here, and all they have to do is practice medicine.

Are other physicians concerned that you are taking their patients?
Holmes: Local doctors see us as an extension of primary care, and they're very open to it. If a patient wants to come in at 4 p.m. and the doctor's office is closing, some of them will refer the patient to us.

Some solo practitioners don't have anyone to back them up. We had one who referred her patients to us while she took the first vacation she'd had in years.

Can a franchise offer healthcare that is both personal and local?
Sullivan: Healthcare really is local. There are 49 units in this system so far, and we've got experience in urban, metro and rural communities. We find a need in all those areas.

We're figuring out how to make urgent care work within each community. In many small towns, this is the main healthcare option, and patients develop relationships with this place as if it were primary care. No matter where you go, folks need healthcare. This is a good, recession-proof business.

What is the future of urgent care?
Holmes: We're seeing a generation without primary-care physicians, and they're not interested in being tied to a doctor. They're very mobile, and they want to remain mobile. They want healthcare on their time, and urgent care is where they are coming.