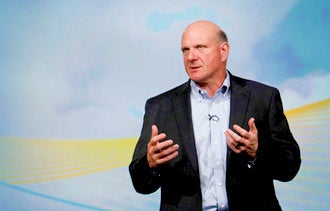 If you view the current version of Microsoft Office as antiquated rather than innovative, the tech giant now says it's about to change your mind. At an event today in San Francisco, Microsoft CEO Steve Ballmer announced a major upgrade to the software -- calling it the company's "most ambitious" release ever.

There are at least two changes that are worth noting for small-business owners. First, the new Microsoft Office is integrated with SkyDrive, Microsoft's cloud service. This means that once you sign into Office, your personalized settings and recently used files will follow you between devices and locations. Your team can also more easily share and work on Office files such as Word documents and Excel spreadsheets. Microsoft says cloud subscribers will automatically get future upgrades across devices as well as extra storage.

The other significant upgrade is Office's use of social features. In June, Microsoft acquired Yammer, a provider of enterprise social networks. As part of the new Office, Microsoft says it is integrating Yammer with SharePoint, the company's document management app for teams. This means you and your employees can interact with each other through Office, kind of like your own private social network.

The new Office also comes with Skype, so subscribers will be able to call or instant message anyone in their contacts, directly from Office.

Have an iPad or another touch-enabled device? The new Office has been optimized so you can pinch and zoom, and use swiping and tapping commands. It also comes with advanced note-taking features -- yes, you can use a stylus if you choose -- as well as upgrades to PowerPoint for making presentations.

Prices for these plans are expected to be announced this fall, the company says.

Will you upgrade to the new version of Microsoft Office? Let us know in the comments section below.

Shipping Port Backlog to Continue 'At Least' Through Mid-2022

How to Collect Digital Marketing Data in 5 Easy Steps

Tips to avoid work stress for your employees